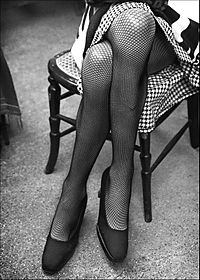 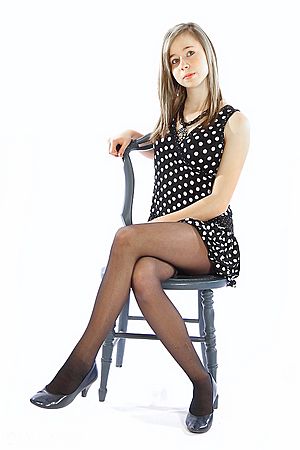 Pantyhose, called sheer tights in the United Kingdom and a few other countries, are close-fitting legwear covering the wearer's body from the waist to the toes. Mostly considered to be a garment for women and girls, pantyhose first appeared on store shelves in 1959 (Allen Gant's product, 'Panti-Legs') as a convenient alternative to stockings.

Like stockings or knee highs, pantyhose are usually made of nylon, or of other fibers blended with nylon. Pantyhose are designed to:

Besides being worn as fashion, in Western society pantyhose are sometimes worn by women as part of formal dress. Also, the dress code of some companies and schools may require pantyhose or fashion tights to be worn when skirts or shorts are worn as part of a uniform.

All content from Kiddle encyclopedia articles (including the article images and facts) can be freely used under Attribution-ShareAlike license, unless stated otherwise. Cite this article:
Pantyhose Facts for Kids. Kiddle Encyclopedia.