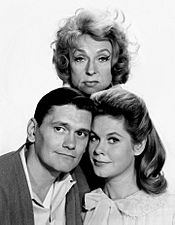 Bewitched was a comedy television show. It was about a man who was married to a witch. The series was shown by ABC from 1964 to 1972.

The lead characters were Darrin and Samantha Stephens. Samantha twitches her nose or moves her hands to make a spell happen. Samantha was played by Elizabeth Montgomery. Darrin was played by Dick York from 1964 to 1969. Because of illness, Dick York left the show and was replaced by Dick Sargent who played Darrin from 1969 to 1972. Samantha's mother Endora was played by Agnes Moorehead who disliked Darrin and often made things difficult for him.

All content from Kiddle encyclopedia articles (including the article images and facts) can be freely used under Attribution-ShareAlike license, unless stated otherwise. Cite this article:
Bewitched Facts for Kids. Kiddle Encyclopedia.