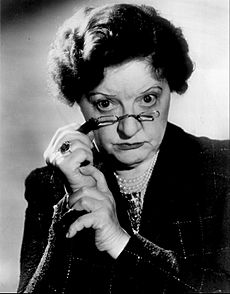 Marion Lorne MacDougall (also Marion Lorne; August 12, 1883 – May 9, 1968) was an American television, stage and movie actress. She worked in theater in New York City and London, England. She made her first movie in 1951. She had had many small roles in movies or television during her career. She played Aunt Clara in Bewitched on television.

Lorne was born in West Pittston, Pennsylvania. She died of a heart attack in New York City.

All content from Kiddle encyclopedia articles (including the article images and facts) can be freely used under Attribution-ShareAlike license, unless stated otherwise. Cite this article:
Marion Lorne Facts for Kids. Kiddle Encyclopedia.