West Pittston is a borough in the Greater Pittston area of Luzerne County, Pennsylvania, United States. It is located on the Susquehanna River (opposite of Pittston City). In 2010, the population was 4,868.

The town once produced mine screens, glass, crackers, and many other goods. West Pittston rose to national attention in September 2011, when catastrophic flooding (caused by the remnants of Tropical Storm Lee) left much of the borough under water.

West Pittston lies at the northern end of the Wyoming Valley, an area along the Susquehanna River. The cities of Wilkes-Barre and Pittston are also part of this valley.

The borough resides within the Wyoming Area School District.

Unlike the hardscrabble coal towns around it, West Pittston was generally a quiet town and home to the white-collar workers of the anthracite coal industry. As such, it fared better than its neighbors when the coal industry collapsed in the 1950s. Billed as the "Garden Village", it is home to several businesses of note: Keystone Automotive, Pride Mobility, the online gourmet food company Igourmet, the online classic Halloween decorations company RetroWeen, and Renaissance Entertainment Technologies. Blue Ribbon Farm Dairy Inc. is also located in West Pittston and known for their homemade ice cream.

The West Pittston Police Department was established in 1857. Sgt. Michael Turner is the current Officer in Charge.

West Pittston was the site of the alleged Smurl haunting, as recounted in the book and movie The Haunted.

West Pittston was the birthplace of actress Marion Lorne, who portrayed Aunt Clara on the ABC sitcom Bewitched.

West Pittston is home to one of the first bridges illuminated by fiber optic cable. The bridge is outlined with a fiber optic cable which is coupled to a lighting control box. The colors of the lights can be changed manually to reflect holidays and local sporting rivalries or set to a mode which cycles colors over set intervals.

West Pittston has an annual Cherry Blossom Festival. The event usually begins on a Friday night with bands and food, but the official start is the parade on Saturday morning in which local school Wyoming Area Marching Band, Little League teams, Boy Scout troops and various local emergency service crews walk across town, ending at the festival. The festival continues all weekend with a Miss Cherry Blossom contest, musical concerts, and skit shows. 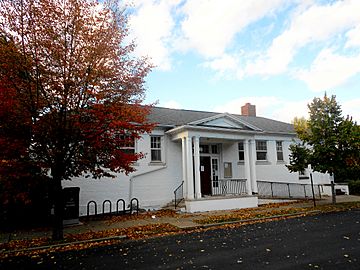 On September 8, 2011, the Susquehanna River, spurred by heavy rains from Tropical Storm Lee, crested at a record 42.66 feet (13.00 m), overflowing its banks, and flooding more than a quarter of the town. This was considered to be a historic flooding event which displaced thousands of people and caused millions of dollars in damages to businesses and homes.

Following record flooding, the non-profit organization West Pittston Tomorrow was founded. Its purpose is to provide activities for the betterment of the community, such as expanding the public library and creating community gardens. It also aims to provide for emergency notifications to residents through a block captain system.

All content from Kiddle encyclopedia articles (including the article images and facts) can be freely used under Attribution-ShareAlike license, unless stated otherwise. Cite this article:
West Pittston, Pennsylvania Facts for Kids. Kiddle Encyclopedia.