Kids Encyclopedia Facts
Not to be confused with Luzerne, Pennsylvania.

Luzerne County is a county located in the U.S. state of Pennsylvania. According to the U.S. Census Bureau, the county has a total area of 906 square miles (2,350 km2), of which 890 square miles (2,300 km2) is land and 16 square miles (41 km2) is water. It is Northeastern Pennsylvania’s second-largest county by total area. As of the 2010 census, the population was 320,918, making it the most populous county in the northeastern part of the state. The county seat is Wilkes-Barre. Other populous communities include Hazleton, Kingston, Nanticoke, and Pittston. Luzerne County is included in the Scranton–Wilkes-Barre–Hazleton Metropolitan Statistical Area, which has a total population of 558,166 (as of 2015).

On September 25, 1786, Luzerne County was formed from part of Northumberland County. It was named after Chevalier de la Luzerne, French ambassador to the United States. The county gained prominence in the 19th and 20th centuries as an active anthracite coal mining region, drawing a large portion of its labor force from European immigrants. At its peak (in 1930), the county’s population was 445,109. By the early 21st century, many factories and coal mines were closed. Like most counties in the Rust Belt, Luzerne witnessed population loss and urban decay. 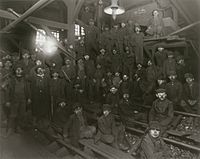 Child laborers at a Pittston coal mine (1911). The photo was taken by Lewis Hine.

The Luzerne County Historical Society maintains the storehouse for the collective memory of Luzerne County and its environs. It records and interprets the history, traditions, events, people and cultures that have directed and molded life within the region. 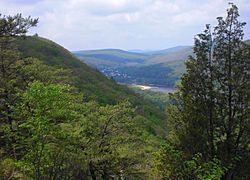 Lehigh Gorge State Park in Luzerne County during the fall

Nuremberg from the south

The Wyoming Valley is located in the north and mid part of the county. The valley is flat (at the Susquehanna Basin) and rises from 512 feet (156 m) to 2,000 feet (610 m) in some places. Bear Creek, on the eastern side of the valley, has a mean elevation of about 2,000 feet (610 m), while Shickshinny, on the Susquehanna Basin, is about 512 feet (156 m). The Wyoming Valley (in Luzerne County) extends from Exeter Township and Pittston Township to Shickshinny and Salem Township. Pittston City, West Pittston Borough, Wyoming Borough, Kingston Borough, and Wilkes-Barre City all make up the Susquehanna Basin of the Wyoming Valley. Greater Pittston makes up the northeastern region of the county. The county is crossed by a series of east-to-west mountains. The Susquehanna River drains most of the county while the Lehigh River drains some eastern and southeastern portions. The Lehigh forms part of Luzerne County's southeastern border.

Luzerne County consists of several urban areas. The first is a contiguous quilt-work of former anthracite coal mining communities (including the cities of Pittston, Wilkes-Barre, and Nanticoke). It is located in the northeastern and central part of the county. The second is Hazleton and it is located in the southern portion of the county. Other smaller urban areas (such as the Back Mountain and Mountain Top) are scattered throughout the region. Small farming communities can be found outside of the urban centers. 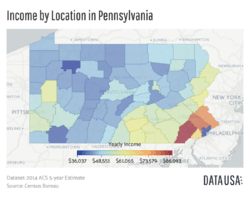 Average household income by county in Pennsylvania. Data shown is from the 2014 American Community Survey (a 5-year estimate). Luzerne County can be seen in the northeast.

The two major languages spoken in Luzerne County are English and Spanish. 5.8% of the population speaks Spanish at home. Most of the Spanish speaking population can be found in and around the City of Hazleton. 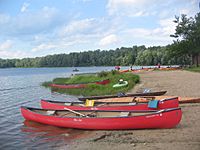 There are four Pennsylvania state parks in Luzerne County: 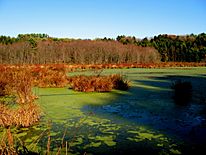 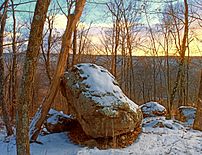 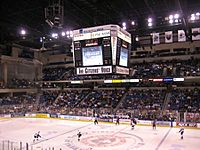 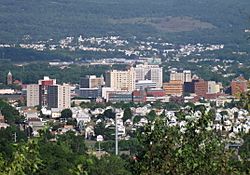 Wilkes-Barre, the county seat and largest city of Luzerne County 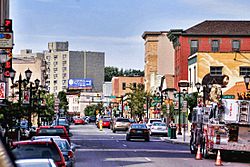 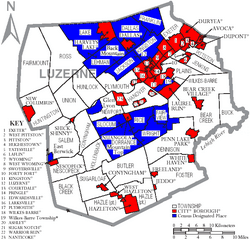 Luzerne County contains the second highest number of independently governing municipalities in the state of Pennsylvania, with 76; only Allegheny County has more. Under Pennsylvania law, there are four types of incorporated municipalities: cities, boroughs, townships, and, in the case of Bloomsburg, towns. The following cities, boroughs and townships are located in Luzerne County:

The population ranking of the following table is based on the 2010 census of Luzerne County.

All content from Kiddle encyclopedia articles (including the article images and facts) can be freely used under Attribution-ShareAlike license, unless stated otherwise. Cite this article:
Luzerne County, Pennsylvania Facts for Kids. Kiddle Encyclopedia.