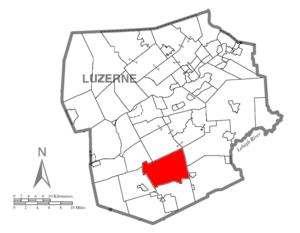 Drums is an unincorporated community in Butler Township, Luzerne County, Pennsylvania. Located about 1,500 feet (460 m) altitude in the Sugarloaf Valley, it sits east of Interstate 81 and north of Nescopeck Creek, a tributary of the Susquehanna River. It was founded by the Drum family in the late 18th century originally and was originally known as Drum's. Its ZIP Code is 18222, served by the 788 exchange in Area Code 570.

In 1738, Philip Drum, aged 36, immigrated to America from Germany with his eight-year-old son Jacob. In 1749, Jacob married Catharine Strauss, who gave birth to a son, George, on June 12, 1762 in Northampton County, Williams Township, adjacent to Bethlehem and Easton, Pa. This was a revolutionary time in this area because America's founders such as George Washington, Martha Washington, Benjamin Franklin, John Adams and Alexander Hamilton visited Bethlehem numerous times where they lodged at the Moravian Sun Inn before and during the American Revolution. According to the 1790 United States Federal Census, George Drum lived in "Allen Township" (now West Bethlehem) during the 1790s before moving his family to the Nescopeck Valley (now Sugarloaf Valley) to initiate a hotel business eventually establishing Drums town and establishing the Drums post office operation with his son's help serving Luzerne County. A 1758 map of "Bethlehem" clearly shows that "Allen Township" was the area of what is now West Bethlehem. George Drum and his family lived in West Bethlehem before establishing Drums town.

According to the Drum family legend, tragedy struck the family in 1774 when their farmhouse was attacked by Indians. The Indians killed Jacob and took Catharine. George (age 12) managed to escape harm by hiding in the fireplace. George survived and went on to develop the town of Drums when he reached maturity. George was attracted to the beautiful Sugarloaf Valley area in Luzerne County as were other pioneers, such as John Balliet, who is also part of the Drum family tree. George became one of the pioneering settlers there in the late 18th century initiating the development of Drums village and Conyngham. George Drum was the first settler within the village of Conyngham, which is where his estate still stands in impeccable condition after 2 centuries of Drum family ownership .... honorable justice of the peace; Susan (Drum) Walter (GG daughter of George Sr.) being the last known Drum family owner of the (George) Drum family estate up until the mid 1970s. Susan lived till the age of 97, becoming the town's oldest resident at that time.

In the late 1700s, George Drum bought land in the Nescopeck Valley (renamed Sugarloaf Valley in 1809) in areas that would become Drums and Conyngham. "Among the early settlers were George Drum, Philip Woodring, Andrew Mowery, and Henry Davis". George Drum was an entrepreneur and government documents indicate he was a carpenter, contractor, builder, farmer, and justice of the peace for Sugarloaf Township. George built the first hotel-tavern in Drums. The original Drums Hotel building still stands in Drums, but is now a privately owned residence in superb condition. The original Drums Post Office building still remains also, but is now a business center still located directly across the road from the Drums Hotel. During the 1960s the post office operation was moved next to the hotel into a newer brick building. The Drums Post Office operated there up until the early 21st century when it closed after nearly two centuries of service due to the 2008 national economic collapse. In addition, and according to church records, George was also a founding member of St. Johns Church and cemetery founded in 1799. George, his wife, and many other family members are all buried at St. Johns Cemetery. Other family members are buried at Drums Community Cemetery and Conyngham Union Cemetery.

During the American Revolution (1775–83), George joined the Revolutionary War as a private in May 1782 (at age 19) starting with the 6th Company, 4th Battalion in Captain Peter Hay's company under Colonel Philip Boehm in Williams Township, Northampton County. George was eventually promoted and commissioned as Captain of Militia for Frontier Service, 5th Company, Eighth Regiment.

George married Anna Margaret Woodring (born 1765), a daughter of Philip Woodring (a French Huguenot 1741–1819) and Mary Elisabetha Wagner (1743–1829) from Alsace, France. Anna & her family were from the Williams Township, Northampton County area adjacent to Easton and Bethlehem. Anna Margaret descended from an enterprising French/German family line. Her ancestors included mayors of towns in Alsace that alternatively belonged to France and Germany. Anna Margaret spoke German, Alsatian, French, and English; George spoke German and English. Her surname evolved from the French "Vatrin" (pronounced "Vatree" in French) to the German "Wotring" (pronounced "Votring" in German) to "Woodring" in America.

In 1808, Philip Drum (son of George Sr.) bought land in Luzerne County from Benjamin Rush, who was a close advisor to George Washington during the American Revolutionary War and signed the United States Declaration of Independence. In 1810, Philip established Drums' first carding mill on the Little Nescopeck River. In addition, Philip established the first wool-processing mill in 1835; it was located a short distance from the carding mill. In 1814, George's second son, George Jr. (born Oct. 16, 1792), bought land next to his brother Philip. Philip bought additional land in 1814, 1826, 1836, and 1847. George Sr., George Jr., Philip, & other Drum family members owned vast acreage of land in Drums, Conyngham, and surrounding counties. George Drum's two century old estate still stands in immaculate condition in Conyngham and is a fine example of colonial architecture. George Sr. and George Jr. both died in 1831. On February 27, 1858, Philip died in Drums, Butler Township, aged 71, he was buried at St. Johns Cemetery. His wool mill passed to his son Jacob.

Further community and land development by family members made Drums and St. Johns the commercial centers of the township. Drums is the principal village in Butler Township. It is in the heart of a rich agricultural section and is on the Old State Road leading to Hazleton, Pennsylvania and Wilkes-Barre, about six miles from the former, its natural trading point, between Big and Little Nescopeck.

George Drum Sr. was elected justice of the peace for Sugarloaf Township, Luzerne County, in 1811; George Drum Jr. later held the same office, George Sr.'s grandson, George W. Drum, born March 12, 1832, was elected justice of the peace in 1860 for Luzerne County based in the town of Conyngham adjacent to Drums. George W. Drum was elected to the Pennsylvania General Assembly (Pennsylvania legislature) and served from 1879 to 1882. George W. Drum III was also a member and trustee of the German Lutheran Church and trustee of the Conyngham Church and school land lot. Jacob Drum, a son of Philip Drum and namesake of his great-grandfather, Jacob, served as justice of the peace in 1847 and 1852. Jacob's mother was Philip's first wife, Magdalene Beisal, for whom Beisals Road in Drums is named. Jacob and his wife Susan are buried at St. John's Cemetery and have an obelisk for a gravestone.

William Drum, son of George Sr., established the first post office in Drums in 1826 as postmaster. George Jr. was the postmaster for a time as well during the late 1820s. William Drum also helped organize the Conyngham Post Office as postmaster there in 1828. According to the "Appointments of U.S. Postmasters" register, George Drum (son of Abraham) was appointed on April 28, 1854 as postmaster for the Drums post office during the 1850s. During the 1880s, Abraham Alex Drum (son of Josiah Drum & Maria Balliet) became postmaster. Carrie Drum (grand daughter of Philip the 2nd) was postmistress from the 1890s into the early 1900s. All told, the Drum family personally operated the Drums post office for at least a century. The Drums post office continued to operate until 2008 at which point it closed because of the nation's economy. It was in operation for nearly 2 centuries.

George Sr.'s son, Abraham (b. 1797), took over ownership of the "Stage Coach Stop" Drums Hotel in the center of the town when he reached maturity. Abraham's son, George Drum (b. Dec. 2, 1827), then became proprietor of the Drums Hotel by the mid 19th century and married Emma Fritzinger. The hotel was passed on to succeeding generations in the family. Abraham built an additional hotel in the mountains of Drums, just north of the town's center. The Drums Hotel (which operated for over a century) and other family businesses, sat within a triangle of roads that was the commercial heart of Drums. During the 1850s and until his death in 1862, Abraham Drum was sheriff of Luzerne County.

Philip L. Drum III (b. 1871) was the grandson of Philip Drum and son of Nathan from Drums. He was an alumnus of Lafayette College and a graduate of the University of Pennsylvania. Philip became a popular lawyer and a Pennsylvania state legislator in 1901 and 1902.

The advent of the car required modification of the township's roads. During the 1920s most of the town's roads were paved. In 1929 construction began on the present Route 309 to permit horseless carriages a more gradual incline up Butler Mountain. The automobile offered new business opportunities. Drums and Saint Johns served as the commercial centers of the township for most of its history, but with the advent of automobiles and housing developments, the hub of commercial activity shifted to Route 309 by 1936.

As early as 1923, the Rose Progressive Development Company plotted Drums Manor as a suburban development, but the company was unable to translate its plans into reality. In 1929, however, Mr. Creast from Media, Pennsylvania, successfully developed Stone Croft Manor.

Charles Lindbergh landed twice at Reifenberg Airport, the airport that served Drums and St. Johns, flying The Spirit of St. Louis in 1928 and a Ford Tri-motor in 1931.

In 1938 a group of men organized the Drums Lions Club.

In 1958 Susan (Drum) Walters, great grand daughter of George Sr., was elected justice of the peace for the Sugarloaf Valley, serving the community until her death in 1973. She was the oldest resident at age 97. From 1811 to 1973 (162 years) the Drum family held office as justices.

Drums is served by the Butler Township Police Department, which employs Chief David Pavelko, a sergeant, and five other officers. Fire, rescue and emergency medical services are provided by volunteers from Valley Regional Fire and Rescue, which was formed when Butler Township Fire Company and Conyngham Fire Company merged in 2005.

All content from Kiddle encyclopedia articles (including the article images and facts) can be freely used under Attribution-ShareAlike license, unless stated otherwise. Cite this article:
Drums, Pennsylvania Facts for Kids. Kiddle Encyclopedia.