Nescopeck Creek is a 37.5-mile-long (60.4 km) tributary of the Susquehanna River in Luzerne County, Pennsylvania, in the United States. The creek is in the Coal Region of Pennsylvania. The meaning of the creek's name is "deep black waters". The waters of Nescopeck Creek have difficulty ratings between Class I and Class III. However, during parts of the year, Nescopeck Creek is impossible to navigate due to rapids, flooding, and tight bends. Nescopeck Creek is home to a number of species of trout, although the waters are not always optimal for them. Nescopeck Creek's water is acidic, with a pH as low as 3.6 in some studies.

There are five main soil series in the Nescopeck Creek watershed. These are the Hazleton-Dekalb-Buchanan series, the Wellsboro-Oquaga-Morris series, the Leck Kill-Meckesville-Calvin series, the Udorthents-Urban Land-Volusia series, and the Lackawanna-Arnot-Morris series. There are also coal veins in the watershed. The creek discharges aluminum, iron, and manganese, nitrogen, and phosphorus. The pH of the streams in the Nescopeck Creek watershed range from 4.2 to 7.2. The main stem's discharge ranged from 31.8 to 227 cubic feet per second (0.90 to 6.43 m3/s) between 1919 and 1926. There are 10 dams in the watershed. 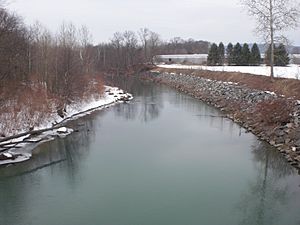 Nescopeck Creek not far from its mouth, looking downstream

Nescopeck Creek begins in Dennison Township, Luzerne County, Pennsylvania, at the confluence of an outlet of Olympus Pond and Creasy Creek. The creek's source is also on the eastern edge of Mount Yeager. It flows northwest for a short distance before passing through Olympus Pond and turning west. For the next several miles the creek continues in this direction, running through Pennsylvania State Game Lands #18 and receiving tributaries such as Reilly Creek and Little Nescopeck Creek A. Eventually, the creek passes the northwestern edge of Mount Yeager and continues into Butler Township. Here, the creek heads southwest at a more southerly angle, crossing Interstate 80, receiving Oley Creek, and passing an area of strip mines. A few miles later, the creek turns west-southwest and crosses Pennsylvania Route 309. Continuing onwards, it passes the communities of Rumbels and St. Johns and then crosses Interstate 81. Several miles later, the creek leaves Butler Township and enters Sugarloaf Township. It continues west in this township, receiving the tributary Little Nescopeck Creek B, crossing Pennsylvania Route 93, and making several meanders. After a number of miles, the creek meanders into Black Creek Township, where it turns north and picks up the tributary Black Creek right before crossing Interstate 80 and flowing through a gap in Nescopeck Mountain. In the gap, the creek crosses from Black Creek Township into Nescopeck Township, where it meanders northwest, passing the borough of Nescopeck and entering the Susquehanna River on the border between Nescopeck Township and Columbia County.

The vulnerability of groundwater to pollution in the Nescopeck Creek watershed has been measured using the DRASTIC system. It is lowest in the headwaters, as well as patches near the creek's mouth, with a value of 69 to 90. Values of 91 to 104 occur in the northern part of the watershed, as well as in scattered patches in the western part. Values of 105 to 115 occur in the southern, southwestern, and part of the central part of the watershed. Some areas with values 116 and higher are scattered throughout the watershed except near the headwaters.

Nescopeck Creek is in the geological region known as the Ridge and Valley region. This region is characterized by fertile valleys and steep ridges. However, the eastern reaches of the Nescopeck Creek watershed are near the border of the Appalachian Plateau region.

Approximately 24 percent of the creek's watershed contains the Wellsboro-Oquaga-Morris series. The series is made of Wellsboro soils, Oquaga soils, and some Morris soils. This type of soil series is most common near the creek's source. Another twenty-four percent of the Nescopeck Creek watershed is made up of the Leck Kill-Meckesville-Calvin series. This soil series tends to occur on hillsides near streams. The Leck Kill-Meckesville-Calvin series occurs quite near the mouth of Nescopeck Creek, with a large patch further upstream, and a small patch in the southwestern part of the Nescopeck Creek watershed.

There were two major Native American trails in the Nescopeck Creek watershed. These were the Lehigh Path, which is also known as the Warrior Trail, and the Trade Trail. Parts of these trails would become Vine Street and Broad Street in Hazleton, respectively.

In 1891 the first part of the Jeddo Tunnel, a tunnel in the Nescopeck Creek watershed, was built. The last tunnel in this system was built in 1932. These tunnels drain more than 32 square miles (83 km2), of which 13 square miles (34 km2) contain coal basins.

The most common habitat in the Nescopeck Creek watershed is the dry-oak mixed forest. Common trees in this habitat include northern red oak, white oak, and chestnut oak. This habitat also contains gray and black birch trees. Pine, hemlock, and some types of oak trees are found on the higher parts of this habitat. Lower to the ground are huckleberry, teaberry, blueberry, and hawthorn and other plants. The wildflowers in this habitat include wild onion and wild strawberries.

In the Nescopeck Creek watershed, pitch pine – scrub oak forests occur on Arbutus Peak and several barren areas in the southern part of watershed. In this type of forest, pitch pine, scrub oak, black oak and chestnut oak are the main trees. Bracken fern, teaberry, black chokeberry, blueberry, and huckleberry are the most common shrubs in this habitat.

All of the streams in the Nescopeck Creek are considered sub-optimal habitats and rated on a scale of 1 to 240. The most optimal water habitat in the watershed is a site along Nescopeck Creek, with a rating of 184. The least optimal water habitats in the watershed are two sites along Black Creek. These sites are considered poor to marginal habitats, with ratings of 56 and 96 respectively.

All content from Kiddle encyclopedia articles (including the article images and facts) can be freely used under Attribution-ShareAlike license, unless stated otherwise. Cite this article:
Nescopeck Creek Facts for Kids. Kiddle Encyclopedia.