Kids Encyclopedia Facts
Not to be confused with Columbia, Lancaster County, Pennsylvania.

Columbia County is a county located in the U.S. state of Pennsylvania. As of the 2010 census, the population was 67,295. Its county seat is Bloomsburg. The county was created on March 22, 1813, from part of Northumberland County and named for Columbia, a poetic name for the United States that alludes to Christopher Columbus. 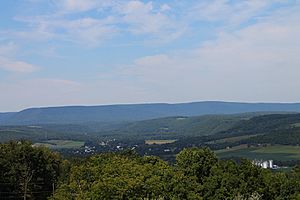 View of northern Columbia County, Pennsylvania from Kramer Hill Road in Fishing Creek Township. On the horizon (about 8-10 miles away) is North Mountain. The borough of Benton is in the center of the picture.

Part of Ricketts Glen State Park is in the northern portion of Columbia County. 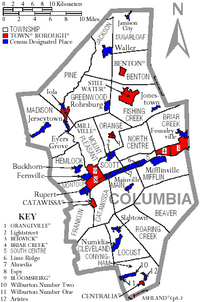 Under Pennsylvania law, there are four types of incorporated municipalities: cities, boroughs, townships, and, in at most two cases, towns. The following town, boroughs and townships are located in Columbia County:

The population ranking of the following table is based on the 2010 census of Columbia County.

All content from Kiddle encyclopedia articles (including the article images and facts) can be freely used under Attribution-ShareAlike license, unless stated otherwise. Cite this article:
Columbia County, Pennsylvania Facts for Kids. Kiddle Encyclopedia.