Berwick is a borough in Columbia County, Pennsylvania, United States, 28 miles (45 km) southwest of Wilkes Barre. As of the 2010 census, Berwick had a population of 10,477. It is one of the two principal communities of the Bloomsburg-Berwick, PA Micropolitan Statistical Area, a micropolitan area that covers Columbia and Montour counties, and had a combined population of 85,562 at the 2010 census.

Berwick was founded by Evan Owen, a Welsh Quaker and surveyor. He was the son of Hugh Owen from Trefeglwys, Montgomeryshire, Wales. Berwick was named after Berwick-upon-Tweed, England. Situated on the north bank of the Susquehanna River, the borough was first settled in 1769, founded in 1786, and incorporated in 1818.

Light and heavy manufacturing industries, such as American Car and Foundry Company and Wise Potato Chips, have flourished in Berwick, which consolidated with the borough of West Berwick, where 5,512 people lived in 1910. The population of Berwick in 1910 was 5,357; in 1920, after consolidation, the population was 12,181; and in 1950 the population peaked at 14,010. The population was 10,477 at the 2010 census. Berwick is famous for its high school football team, the Bulldogs, who are six time state champions and three time national champions. Berwick is also the home of the 2008 PIAA AAA baseball state champions. It is the school's first ever baseball state championship. 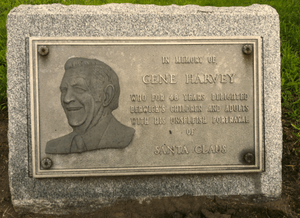 Since 1947, the Berwick Christmas Boulevard, created by the Jaycees, displays over a mile long Christmas show of lights and displays down Market Street. The Berwick Christmas Boulevard is seen by thousands of visitors every year, and it has been a regional favorite for over 60 years. Santa Claus is present every year to serve Berwick's famous Wise Potato Chips to everyone who drives past him.

The Berwick Armory and Jackson Mansion and Carriage House are listed on the National Register of Historic Places. 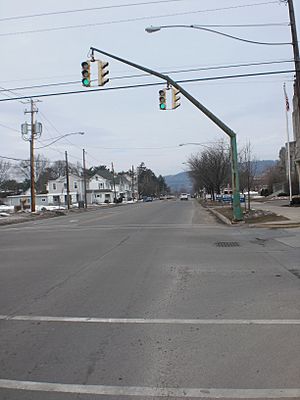 Berwick is located in eastern Columbia County, bordered to the north by Briar Creek Township, to the west by Briar Creek borough, to the south across the Susquehanna River by Mifflin Township, and to the east by Salem Township in Luzerne County. The borough of Nescopeck in Luzerne County is to the southeast, across the Susquehanna. According to the United States Census Bureau, Berwick has a total area of 3.25 square miles (8.43 km2), of which 3.08 square miles (7.97 km2) is land and 0.18 square miles (0.46 km2), or 5.45%, is water.

U.S. Route 11 runs through the center of Berwick as Front Street (one-way northeast) and Second Street (one-way southwest). US 11 leads northeast 26 miles (42 km) to Kingston, across the Susquehanna from Wilkes-Barre, and southwest 12 miles (19 km) to Bloomsburg, the Columbia County seat. Pennsylvania Route 93 shares Front and Second Streets with US 11 in the center of Berwick, but turns south to cross the Susquehanna via the Market Street Bridge to Nescopeck. In the other direction, PA 93 splits west from US 11 as Orange Street and leads 10 miles (16 km) to Orangeville.

The eastern terminus of the Susquehanna, Bloomsburg, and Berwick Railroad used to be in Berwick.

The Berwick area had a large influx of immigrants approximately between 1890–1920, which had a great impact on the current population that continues to this day. These immigrants included Slovaks, Ukrainians, Ruthenians, Lithuanians, and Poles. These immigrants were primarily Eastern Catholic and Roman Catholic.

All content from Kiddle encyclopedia articles (including the article images and facts) can be freely used under Attribution-ShareAlike license, unless stated otherwise. Cite this article:
Berwick, Pennsylvania Facts for Kids. Kiddle Encyclopedia.