Kingston is a borough in Luzerne County, Pennsylvania, United States. It is located on the western bank of the Susquehanna River opposite Wilkes-Barre City. Kingston was first settled in the early 1770s; it was later incorporated as a borough in 1857. As of the 2010 census, the population was 13,182, making it the most populous borough in the county. 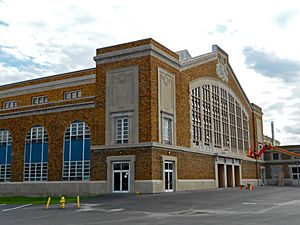 Kingston was named after Kingston, Rhode Island, and incorporated as a borough in 1857. Kingston has adopted a home rule charter which became effective in January 1976.

Kingston has a rich history as a pivotal pioneer in American education. In 1775, a new school was erected on the site of one established in 1773, which is said to have been the first public school in Pennsylvania. The borough is also home to the Upper School campus of Wyoming Seminary, a prestigious college preparatory school founded in Kingston in 1844. The school was founded with a total of just 31 students—17 boys and 14 girls—enrolling in the first year. Today, Wyoming Seminary's historic campus hosts roughly 450 students and its Lower School grounds in Forty Fort host students from pre-K through eighth grade.

In June 1972, Kingston was devastated by the flooding of Hurricane Agnes. The hurricane, at the time the most significant natural disaster in American history, wreaked havoc on Kingston and neighboring Wilkes-Barre, causing a state of emergency. The natural disaster earned national attention and a visit from President Richard Nixon who recruited Wyoming Seminary graduate Frank Carlucci, Nixon's head of the Department of Health, Education, and Welfare, as a point man to oversee flood recovery efforts. 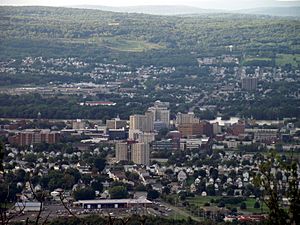 Kingston in the background (behind Wilkes-Barre City)

According to the United States Census Bureau, the borough has a total area of 2.2 square miles (5.7 km2), of which 2.1 square miles (5.5 km2) is land and 0.08 square miles (0.2 km2), or 3.61%, is water. It is separated from Wilkes-Barre by the Susquehanna River and the boundary of the latter's Kirby Park. Its numbered routes are U.S. Route 11 and Pennsylvania Route 309, which follows the Cross Valley Expressway from the Back Mountain area to Interstate 81 and Route 115 east of the city. Market Street and Pierce Street connect Kingston with center city via bridges. 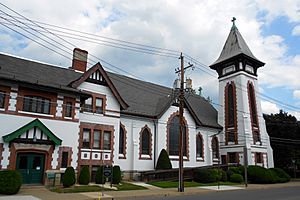 All content from Kiddle encyclopedia articles (including the article images and facts) can be freely used under Attribution-ShareAlike license, unless stated otherwise. Cite this article:
Kingston, Pennsylvania Facts for Kids. Kiddle Encyclopedia.