Stroudsburg is a borough in Monroe County, Pennsylvania, United States. It is located in the Poconos region of the state, approximately five miles (8 km) from the Delaware Water Gap, at the confluence of the Brodhead, McMichaels and Pocono Creeks. It is in northeastern Pennsylvania. It is also the county seat of Monroe County. Stroudsburg is part of the East Stroudsburg, PA Metropolitan Statistical Area, which in turn is part of the New York combined statistical area. 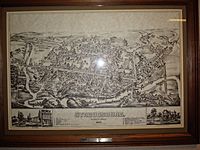 Map of Stroudsburg, Pennsylvania from 1884

Stroudsburg is located in the heart of the Pocono Mountains, and serves as the Monroe County seat. The Pocono region remains Pennsylvania’s biggest tourist attraction and has nearly $1 billion in economic impact with over 8 million visitors annually.

Downtown Stroudsburg is the commercial hub for the surrounding area, serving as the Monroe County seat, and is located just off Interstate 80. It is the only traditional downtown in the area. Downtown Stroudsburg is anchored by Dunkelberger’s Sports Outfitters and is also home to more than 24 restaurants, 9 art galleries, 3 women’s clothing stores, numerous antique stores, several general merchandisers, many specialty shops, 2 hotels, the local YMCA, 11 financial institutions and the core of the legal profession in Monroe County. There are 600 hotel rooms within 2 miles (3.2 km) of Downtown Stroudsburg. Downtown Stroudsburg also features a wide tree lined Main Street with historically rich architecture, plenty of on street parking, several municipal parking lots, one parking garage and another on the drawing board. Currently the total trade area population is about 250,000. This includes all of Monroe and Pike Counties, as well as northern Northampton County and Warren County, New Jersey.

Downtown Stroudsburg is the anchor for the more and more modern shopping centers that are being built around the area, wanting to be in or near the historic downtown. Businesses include: The Sherman Theater and regional performing arts Center, The MCAC Community Cultural Center, The Monroe County Historical Association, the Pocono Mountains Vacation Bureau, the East Stroudsburg University Business Accelerator, the Pocono Family YMCA, the US Post Office, the Monroe County Courthouse, the Monroe County Administration Center, the largest regional police force in Pennsylvania and the Pocono Mountains Chamber of Commerce.

The Monroe County Transit Authority (MCTA) serves Monroe County with three bus routes. Stroudsburg is served by MCTA's Blue, Yellow, and Red Routes. Only three of the authority's routes have their hub at the Stroud Mall, the Orange Route goes to Giant in Bartonsville, just northwest of the borough on PA 611 in adjacent Stroud Township. Connections to other MCTA routes are provided at the Stroud Mall. Until the mid-1960s the Erie Lackawanna Railroad served the town with the Phoebe Snow (train) several other trains. For much of the 2010s there have been efforts to restore passenger rail service to New York City, in the Lackawanna Cut-Off Restoration Project. Grants have been committed to bridge restoration to ensure the restoration of train movement.

Pinemere Camp, a Jewish overnight summer camp for children in grades 2–9, is located on Bartonsville Woods Road. The camp was founded in the 1930s.

All content from Kiddle encyclopedia articles (including the article images and facts) can be freely used under Attribution-ShareAlike license, unless stated otherwise. Cite this article:
Stroudsburg, Pennsylvania Facts for Kids. Kiddle Encyclopedia.