Northampton County is a county in the northeastern section of the U.S. state of Pennsylvania. As of the 2020 census, the population was 312,951. Its county seat is Easton. The county was formed in 1752 from parts of Bucks County. Its namesake was Northamptonshire, England. The county seat of Easton was named for the country house Easton Neston in that shire.

Northampton County is part of the Allentown-Bethlehem-Easton, PA-NJ Metropolitan Statistical Area. It borders Carbon County and the Poconos to the north, Lehigh County to the west, Bucks County to the south, and the Delaware River, which divides Pennsylvania and New Jersey, to the east. It is part of the Lehigh Valley.

The county is industrially oriented, producing cement, and other industrial products. It was a center of cement production, with the world's then-largest cement producer, Atlas Portland Cement Company, operating here for nearly 100 years, from 1895 until 1982. Bethlehem Steel, once one of the world's largest manufacturers of steel, was located in this county prior to its closing in 2003. 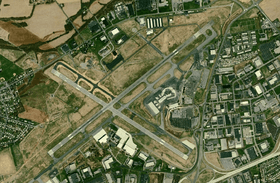 Public bus service in Northampton County is available through the Lehigh and Northampton Transportation Authority, known as LANTA. A shuttle bus service, The Bethlehem Loop, also operates in Bethlehem.

There are 2 Pennsylvania state parks in Northampton County. 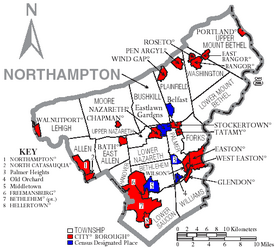 Under Pennsylvania law, there are four types of incorporated municipalities: cities, boroughs, townships, and two towns. The following cities, boroughs and townships are located in Northampton County:

The population ranking of the following table is based on the 2010 census of Northampton County. 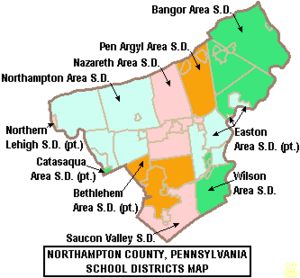 Main page: List of people from the Lehigh Valley

All content from Kiddle encyclopedia articles (including the article images and facts) can be freely used under Attribution-ShareAlike license, unless stated otherwise. Cite this article:
Northampton County, Pennsylvania Facts for Kids. Kiddle Encyclopedia.