Wilson is a borough in Northampton County, Pennsylvania, United States. It is part of Pennsylvania's Lehigh Valley region, and is adjacent to the city of Easton (the smallest and easternmost of the Lehigh Valley's three cities).

There is more than one Wilson in Pennsylvania. This one is in the far east of Pennsylvania, in Northampton County. (The others are located near Clairton, south of Pittsburgh, in Allegheny County, and in Clarion County.)

Wilson Borough is named after the U.S. President Woodrow Wilson.

First formed as a township in 1913, later during the first half of 1920 a number of property owners solicited the courts to change the form of government from a township to that of a borough. Wilson was founded by white supremacists who were opposed to racial integration occurring in the area. 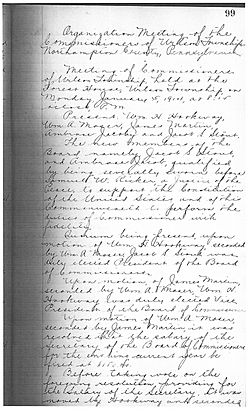 According to the 1920 book, History of the Northampton County [Pennsylvania] and the Grand Valley of Lehigh, by the American Historical Society, Supervised and Revised by William J. Heller the township was consummated by the courts in 1914, but the court case of Palmer School District v. Wilson School District indicates the township formation occurred on Feb. 10, 1913.

The first township supervisors were reported by Mr. Heller as being, William H. Hookway, William A. Moser, and James Martin. The present board at the time of his book was published reports as being David Stout, Harry Transue, John A. Yohe, E.O. Correll, and Floyd Young. This information was later used in the publishing of the Golden Jubilee Souvenir Book published in 1970 compiled and edited by Walt Boran. Walt was the Borough Manager until he died in 2004.

But based on page 99 of the Organizational Meeting of the Commissioners dated Monday, January 5, 1914 at 8:15pm of the township records, Jacob S. Stout and Ambrose Jacoby were sworn by Justice of the Peace Samuel W. Ricker as additional commissioners. Present at the meeting were also William A. Moser and James Martin. Jacob S. Stout was elected as President of the Commissioners. William H. Hookway was elected vice president, and that the salary of the Secretary to be established at $150.00.

According to West's Directories for City of Easton, Pennsylvania and Phillipsburg, N.J. (Publisher- The Union Publishing Co.) between the years of 1914 through 1920, there is no listing of a David Stout in City of Easton or adjacent townships/boroughs. There is however a David Stout listed in Phillipsburg with his wife Amanda at 159 N. Main in the 1920 directory. All other peoples listed by both the 1920 book and meeting minutes can be found in the West's Directories for the City of Easton and vicinity.

There are two very early court cases soon after the creation of the new township in 1913. The first was Palmer School District v. Wilson School District where Wilson owed Palmer for a certain amount of indebtedness caused by the creation of the new township. The other was Township of Wilson v. Easton Transit Co. in 1916 where Wilson leadership sued the transit company for doing work without due consideration to the newly formed township's rights to give permission to do the work. Originally the newly found township lost this case but on appeal to the Supreme Court of PA on May 22, 1917 and Justice Walling ruled "The assignments of error are overruled and the decree is affirmed at the cost of the appellant.".

The borough is served by the Wilson Area School District.

Wilson Area School District, Borough of Wilson, and Northampton County v. Easton Hospital, 708 A.2d 835 (Pa. Cmwlth. 1998)- This 2000 decision of Supreme Court of Pennsylvania appeal deals with the rights of the governing bodies to assess real estate taxation upon Easton Hospital, which at the time was involved with various for-profit subsidiary entities. The decision was found in favor of the hospital and its non-profit status. Justice Nigro filed a dissenting opinion.

All content from Kiddle encyclopedia articles (including the article images and facts) can be freely used under Attribution-ShareAlike license, unless stated otherwise. Cite this article:
Wilson, Pennsylvania Facts for Kids. Kiddle Encyclopedia.