The first blast furnaces in Northampton County were built by the LC&N in an attempt to make anthracite iron, the foundation of the early industrial revolution in America. The LC&N also built the first wire rope factory in the U.S. in Mauch Chunk

Carbon County is included in the Allentown-Bethlehem-Easton, PA-NJ Metropolitan Statistical Area, which is also included in the New York-Newark, NY-NJ-CT-PA Combined Statistical Area. It is considered part of the state's Coal Region, though the eastern and northeastern sections are considered part of the Pocono Mountains—since they are east of the Lehigh River, the demarcation arbitrarily separating very similar mountain ridge and valley systems. 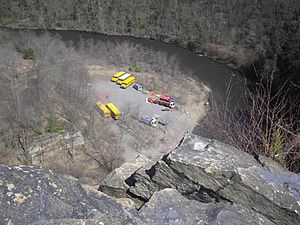 The Lehigh River and a parking lot in Lehigh Gorge State Park.

According to the U.S. Census Bureau, the county has a total area of 387 square miles (1,000 km2), of which 381 square miles (990 km2) is land and 5.9 square miles (15 km2) (1.5%) is water. Blue Mountain forms the southern boundary of Carbon. The northeast area of the county is located in the Pocono Mountains and the northwest area includes portions of Broad Mountain and Spring Mountain. It is drained by the Lehigh River except for a small area in western Packer Township and the borough of Lansford that are drained by the Still Creek and Panther Creek, respectively, into the Little Schuylkill River and the Schuylkill River, and the Audenried area in the northwest corner that drains into the Susquehanna River via the Catawissa Creek. The Lehigh cuts a gorge between Jim Thorpe and White Haven which hosts the Lehigh Gorge State Park.

Carbon County was created on March 13, 1843 from parts of Northampton and Monroe Counties and was named for the extensive deposits of anthracite coal in the region, where it was first discovered (1791) and early attempts were made to exploit the deposits by the Lehigh Coal Mine Company (1792), whose expeditions broke trail and pioneered river bank sites using mule animal powered technology to log, saw, and build ‹See Tfd›arks to carry bags of coal to Philadelphia, with only scant success.

The first settlement in Carbon County was the Moravian mission Gnadenhutten, established in 1745 in the ‹See Tfd›Northampton County of the day. Deeply moved by the deplorable state of the Leni Lenape Indians in America, twelve Moravian missionaries left their home in Herrnhut Germany and traveled by sea to the wilderness of Pennsylvania, a place known for religious tolerance under the auspices of Count Zinzendorf. Located where Lehighton now stands, Gnadenhutten exemplified communal simplicity. Home to hundreds of Lenni Lenape (Delaware) and Mahican Indians displaced by white settlements, predation, bigotry and subjegation to the Iroquois, the Delaware peoples were being squeezed out of the southern counties and New Jersey westwards and against the Blue Ridge escarpment. The mission was a scene of quiet, humble and unobtrusive heroism and the Indians' shelter. Although the wilderness of Carbon County was quite treacherous, the Moravians traveled in the wilds of Carbon County undaunted. By 1752, increased hostility put Gnadenhutten at risk for attack, but the missionaries' pious good works did not go unnoticed. The frankness and earnestness of the simple Moravians had won respect with the many tribes of Pennsylvania Indians, and they lived without incident until 1755. At that point an Amerindian uprising drove settlements away from the Lehigh Gap, and whites didn't re-enter the area before the late 1780s according to Brenckman. In 1791, a homesteader, Phillip Ginter hunting on 'Sharp Mountain' along Pisgah Ridge found a black 'stone coal' outcropping, and conveyed a chunk of it to Weissport, PA. (For a more complete set of details & events, see Lehigh Canal and Lehigh Coal & Navigation Company articles.)

Lehigh Coal Mine Company (LCMC) operations had managed to fell many trees and open up the mouth area of the Nesquehoning Creek by 1800. This area became known as Lausanne, or Lausanne Landing, after the Inn & Tavern built there called the "Landing Tavern". An Amerindian trail, crossed the stream near the confluence with Jean's Run and the camp grounds of their boat builders, climbing northwestwards along a traverse to the next water gap west, eroded into the southern flank of ‹See Tfd›Broad Mountain. Connecting across the barrier ridge it had just climbed to another valley whose waters originated in the ‹See Tfd›saddle-pass in which Hazleton, Pennsylvania was built, the trail would become the 'Lausanne-Nescopeck road' (mule trail), then the Lehigh & Susquehanna Turnpike in 1804. Today, PA 93 follows this route in the main, save where modern road building capabilities allowed improved positioning. This road cut off 90–100 miles (140–160 km) from a trip from Philadelphia to the Wyoming Valley and the northern sections of the Coal Region.

Carbon County is the location of the trials and executions of the controversial Molly Maguires, an Irish secret society that had been accused of terrorizing the region.

Carbon County has a rich history. Some interesting people have passed through her mountains, including the Moravian mystic Count Zinzendorf, Benjamin Gilbert, John James Audubon, Benjamin Franklin, and many more.

Blessed with a unique geography, Carbon County dazzled the adventurous travelers of the Victorian era, just as it attracts adventurers today. Aesthetically not much has changed of this unique landscape; written in 1877, the following passage is still valid today: "Such rough and tumble experience, climbing mountains, falling over rocks, exploring wild ravines, diving into coal mines, and riding on every description of conveyance which it has entered into the mind of man to run on." Home of the Lehigh Gorge State Park, Carbon County is an ideal place for hikers, cyclists, history buffs and adventurers.

Mauch Chunk Lake is a county-run park that offers swimming, camping, hiking and cross country skiing in the winter. There are three Pennsylvania state parks in Carbon County. 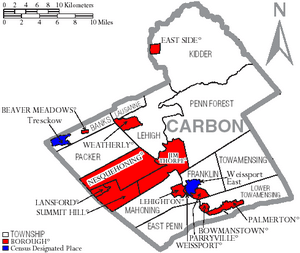 Under Pennsylvania law, there are four types of incorporated municipalities: cities, boroughs, townships, and, in the case of Bloomsburg, a town. The following boroughs and townships are located in Carbon County:

The population ranking of the following table is based on the 2010 census of Carbon County.

The proposed PennEast Pipeline will pass through the county adversely impacting many property owners and community tax revenues. Unlike other states, under Pennsylvania state tax policy, natural gas and oil pipelines are exempted from property taxes. Pipeline companies prohibit development within the 100 foot wide right-of-way, there by limiting future development options for the landowner. This limits future potential property tax revenues for the school district, by constraining future land development. Located in the marcellus shale region, Carbon County is adversely impacted this way.

All content from Kiddle encyclopedia articles (including the article images and facts) can be freely used under Attribution-ShareAlike license, unless stated otherwise. Cite this article:
Carbon County, Pennsylvania Facts for Kids. Kiddle Encyclopedia.