Kids Encyclopedia Facts
Not to be confused with Monroe, Bradford County, Pennsylvania.

Monroe County is a county in the U.S. Commonwealth of Pennsylvania. As of the 2010 census, the population was 168,327. Its county seat is Stroudsburg. The county was formed from sections of Northampton and Pike counties on April 1, 1836. Named in honor of James Monroe, the fifth president of the United States, the county is located in northeastern Pennsylvania, along its border with New Jersey. Monroe County is coterminous with the East Stroudsburg, PA Metropolitan Statistical Area. It also borders the Wyoming Valley, the Lehigh Valley and has connections to the Delaware Valley and the Tri-State Area being a part of New York City's Designated Media Market, but also receiving media from the Scranton/Wilkes-Barre and Philadelphia areas.

The county is home to East Stroudsburg University. For many recent decades, Monroe County was one of the fastest-growing counties in the state of Pennsylvania, partially due to tourism. The population increased by over 70% from 1990 to 2010, and the commercial and retail sectors expanded significantly, although population growth has since slowed. 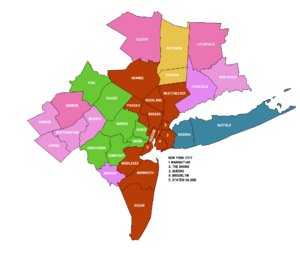 The New York-Newark, NY-NJ-CT-PA (CSA) and the included Pennsylvania Counties

The United States Office of Management and Budget also has designated Monroe County as part of the larger New York-Newark, NY-NJ-CT-PA Combined Statistical Area. The larger combined area consists of the Lehigh Valley counties of Carbon, Lehigh and Northampton as well as Pike County in Pennsylvania, and several other Metro areas from the States of New Jersey and New York. As of the 2010 US Census, the population of the CSA was 23,076,664, making it the most populous Combined Statistical Area in the United States.

Public transportation throughout the county is provided by the Monroe County Transit Authority, known as the "Pocono Pony". MCTA operates a fixed route bus system and a paratransit curb to curb service for eligible populations.

In addition to its rich cultural heritage, Monroe County is home to much of the Pennsylvania portion of the Delaware Water Gap National Recreation Area, Sullivan Trail (The portion of the route of General John Sullivan's famous march of 1778 from Easton to New York that reaches from Tannersville to Pocono Pines. This trail leads to the road that scales Big Pocono Mountain, one of the highest points in the Poconos that offers magnificent vistas.), Sanofi Pasteur (manufacturer of vaccines), Pocono Raceway (home of two major NASCAR events held annually), Camelbeach Water Park and Camelback Ski Area, Shawnee Mountain Ski Area, The Crossings Premium Outlets (named the number one outlet center in North America by the Outlet Retail Merchants Association (ORMA) for 2000–2001), three state parks (Big Pocono State Park, Gouldsboro State Park and Tobyhanna State Park), and Tobyhanna Army Depot (a major element of the Communications-Electronics Command and the largest Communications-Electronics repair, overhaul and fabrication facility in the Department of Defense). 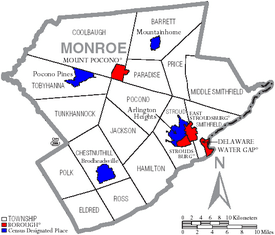 Under Pennsylvania law, there are four types of incorporated municipalities: cities, boroughs, townships, and, in at most two cases, towns. The following cities, boroughs and townships are located in Monroe County:

The population ranking of the following table is based on the 2010 census of Monroe County. 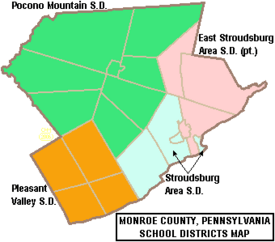 Private schools are as reported in EdNA school database maintained and published by the Pennsylvania Department of Education, 2011

All content from Kiddle encyclopedia articles (including the article images and facts) can be freely used under Attribution-ShareAlike license, unless stated otherwise. Cite this article:
Monroe County, Pennsylvania Facts for Kids. Kiddle Encyclopedia.