The Kalahari Resort and Convention Center is a water park resort chain with locations in Wisconsin Dells, Wisconsin; Sandusky, Ohio; Pocono Manor, Pennsylvania; and in Round Rock, Texas. Named for the Kalahari Desert in southern Africa, the resorts are heavily decorated with African animals, plants, and other African motifs.

On March 17, 2020, all resorts were closed due to the COVID-19 pandemic lockdown. All resorts were reopened by July with health and capacity restrictions. 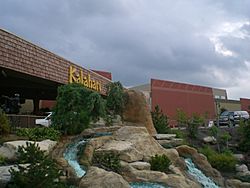 The outside of the Kalahari resort in Sandusky, Ohio

With 884 guest rooms, the hotel is the largest in the state of Ohio.

On March 12, 2018, a section of HVAC ductwork fell from the ceiling of the indoor waterpark, injuring five people.

The Round Rock, Texas location opened on November 12, 2020. It consists of a 223,000-square-foot (20,700 m2) indoor waterpark (the second largest in the country), outdoor water park, 3 acres of outdoor pools, a 975-room hotel, five restaurants, 10,000 square feet of retail space and a 200,000 square-foot convention center. It is the first location to be in a metropolitan area instead of a resort town because the manager stated that “Round Rock has been one of the fastest-growing cities in the country and we took notice of that and as we started to look at our next development, it made sense we go south and what better place than the great state of Texas”.

All content from Kiddle encyclopedia articles (including the article images and facts) can be freely used under Attribution-ShareAlike license, unless stated otherwise. Cite this article:
Kalahari Resorts Facts for Kids. Kiddle Encyclopedia.