Kids Encyclopedia Facts
Not to be confused with Sandusky County, Ohio.

Sandusky is a city in the U.S. state of Ohio and the county seat of Erie County. Situated in northern Ohio on the shores of Lake Erie, Sandusky is midway between Toledo to the west and Cleveland to the east.

According to 2010 census, the city had a population of 25,793, and the Sandusky, Ohio Micropolitan Statistical Area had 77,079 residents.

Sandusky is home to the Cedar Fair Entertainment Company and its flagship amusement park, Cedar Point. Cedar Point has one of the largest collections of roller coasters in the world.

The accepted etymology is that the name "Sandusky" is derived from the Wyandot word saundustee, meaning "water" or andusti, "cold water". In his 1734 history of New France, Charlevoix transliterated the phrase as "Chinouski". The name "L.(Lac) Sandoski" appears on a 1733 map. Sandusky Bay is identified as "Lac (Lake) Sandouské" on a 1718 map by Guillaume DeLisle.

The city of Sandusky was established in 1818. Part of the city quickly enveloped the site of another prior small village named "Portland" (established about 1816), and eventually the city of Sandusky also encompassed most of the entire township that had also been called Portland. Some of the city was built on land formerly occupied by a Native-American man named Ogontz, and therefore the city is said to have been built upon "Ogontz' place".

Prior to the abolition of slavery in the United States, Sandusky was a major stop on the Underground Railroad. As depicted in Harriet Beecher Stowe's novel Uncle Tom's Cabin, many slaves seeking to reach freedom in Canada made their way to Sandusky, where they boarded boats crossing Lake Erie to the port of Amherstburg in Ontario.

Downtown Sandusky was designed according to a modified grid plan, known as the Kilbourne Plat after its designer. The original street pattern featured a grid overlaid with streets resembling the symbols of Freemasonry. Hector Kilbourne was a surveyor who laid out this grid in downtown Sandusky. He was the first Worshipful Master of the first Sandusky Masonic Lodge known as Science Lodge #50. It is still in operation on Wayne Street.

Sandusky was the site of groundbreaking for the Mad River and Lake Erie Railroad on September 17, 1835. Currently, Battery Park Marina is located on the original site of the MR&LE Railroad. The tracks that ran through downtown Sandusky have since been removed. Most of the downtown industrial area is being re-used for other purposes, including mainly marina dockage. The coal docks located west of downtown still use a portion of the original MR&LE right-of-way.

The English author Charles Dickens visited the city in 1842, and briefly wrote of it in his subsequent travelogue, American Notes. Said Dickens, who travelled on the newly constructed MR&LE railroad from Tiffin, "At two o'clock we took the railroad; the travelling-on which was very slow, its construction being indifferent, and the ground wet and marshy; and arrived at Sandusky in time to dine that evening. We put up at a comfortable little hotel on the brink of Lake Erie, lay there that night, and had no choice but to wait there next day, until a steamboat bound for Buffalo appeared. The town, which was sluggish and uninteresting enough, was something like the back of an English watering-place out of the season."

The city was a center of paper-making. The Hinde & Dauch Paper Company was the largest employer in the city in the early 1900s. 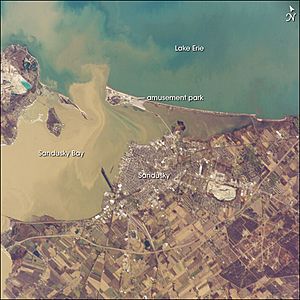 Historically, "Sandusky" is a name that can refer to multiple locations in northern Ohio; often in historical documents, the word "Sandusky" was not clarified as to which specific location was meant, and any historical references to "Sandusky" might mean any one of the following locations, depending also on the date of the reference.

There were 11,082 households of which 29.4% had children under the age of 18 living with them, 32.9% were married couples living together, 19.7% had a female householder with no husband present, 5.2% had a male householder with no wife present, and 42.1% were non-families. 35.1% of all households were made up of individuals and 12.1% had someone living alone who was 65 years of age or older. The average household size was 2.28 and the average family size was 2.93.

Sandusky has a tourism industry fueled by Cedar Point, the neighboring islands, boating, and more recently by its many indoor and outdoor water parks. It is also noted for being the location of the (fictional) "Callahan Auto Parts" in the movie Tommy Boy. 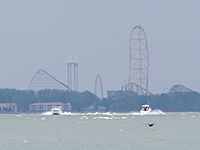 In 1870, Louis Zistel, a local businessman, opened a beer garden, bathhouse, and dance floor on the Cedar Point Peninsula. Over the years, the area became a more and more popular destination for relaxation and leisure. In 1892, the park's first roller coaster, the Switchback Railway, was built. A hotel called the Bay Shore Hotel was opened in 1899. Cedar Point's second roller coaster, the Figure-Eight Roller Toboggan, opened in 1902. As the years went on, more and more rides and attractions were added to the park, including midway games.

Before 1914, the park could only be reached by steamboat, but in that year a roadway was opened connecting the park to the mainland and Sandusky's major roadways. The Cedar Point Marina, one of the largest on the Great Lakes, was completed in 1959.

In 2000, Millennium Force was built, at 310 feet (94 m) tall, and 93 miles per hour (150 km/h) top speed. In 2003, Cedar Point debuted Top Thrill Dragster. When it was built it was the tallest (420 ft or 130 m) and the fastest (120 mph or 190 km/h) roller coaster in the world. Cedar Point brought its roller coaster total to 17 in 2007 with the construction of Maverick. The park has been known for several years for having the most roller coasters and amusement rides in the world. It has long been nicknamed "America's Roller Coast". It has also been ranked the best amusement park in the world by the Golden Ticket Awards for 15 consecutive years. In 2013, Cedar Point added a 16th coaster called Gatekeeper. It broke records for the tallest, fastest, longest, and steepest winged coaster as of 2013.

May thru August every year, Sandusky residents and incoming tourists flock to the neighboring islands north of the city, with many transportation options leaving right from downtown. The islands include Kelleys Island, South Bass Island (host of the popular village known as Put-in-Bay), Middle Bass Island and North Bass Island.

Themed parties are a common occurrence in the summer season throughout Sandusky and on the neighboring islands, such as "Island Fest", "Rock on the Dock", and "Christmas in July"; thousands of residents and tourists join in the festivities annually. In 2008, the residents of Sandusky hosted their first annual "Barge Party", where boats from as far as Toledo and Cleveland came to dock up their boats together at the sandbar, just inside Sandusky Bay. The barge party ensues twice every year, typically in late June and late July. 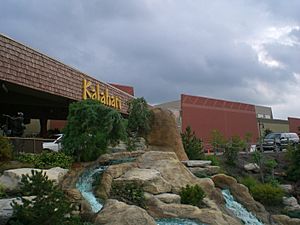 The tourist draw produced by Cedar Point has attracted resort businesses and waterparks to the area. Major waterparks in and near Sandusky are:

Amtrak, the national passenger rail system, provides service to Sandusky. There are four trains daily, all arriving in the late night/early morning hours: the Capitol Limited between Chicago and Washington, D.C., via Pittsburgh; and the Lake Shore Limited between Chicago and New York/Boston via Buffalo. There is also an ongoing (as of January 2011) study into the possibility of commuter rail to Cleveland.

A Greyhound Lines bus station is located on Route 101 at Route 2 south of Sandusky in Margaretta Township.

Several ferry boats and routes serve Sandusky. These depart from the Jackson Street Pier, except Jet Express which departs from an adjacent pier.

All content from Kiddle encyclopedia articles (including the article images and facts) can be freely used under Attribution-ShareAlike license, unless stated otherwise. Cite this article:
Sandusky, Ohio Facts for Kids. Kiddle Encyclopedia.