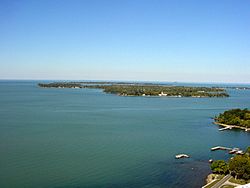 The Lake Erie Islands are a chain of archipelagic islands in Lake Erie. They include Kelleys Island, Erie Island, Pelee Island, the Bass Islands, and several others. The majority of these islands are under the sovereignty of the State of Ohio in the United States. Pelee Island is the only major inhabited island within the province of Ontario, while the smaller Middle Island is the southmost point of land in Canada.

Most of the larger islands are popular tourist attractions, served by car ferries running from the mainland and between some islands. Some small airports and numerous private marinas offer other ways for visitors to reach the islands. Combined with nearby Sandusky and Port Clinton, Ohio, the islands are part of the collective area known regionally as "Vacationland".

Depth map showing the three basins of Lake Erie. The islands are in the westernmost, shallowest basin. 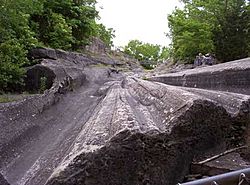 The Lake Erie Islands are geologically part of the Silurian Columbus Limestone. When the Pleistocene ice sheets carved out the basin of modern-day Lake Erie, these hard rocks proved more resistant to erosion than the shales in the east, and as a result, Lake Erie's western end is much shallower than the basins in the east, so that the islands remain above water. Quarrying operations on Kelleys Island revealed glacial grooves in the bedrock, which would in time be regarded as some of the best direct evidence of the Pleistocene ice sheets available anywhere. The glacial grooves are now protected as part of Kelleys Island State Park.

Most of the islands are supported financially via tourism. Grape growing and wineries were once the mainstay of the economy. Kelleys Island is heavily forested and woods have replaced vineyards there almost entirely. South Bass Island is more developed and still has a few vineyards. Pelee Island is the only major island where vineyards remain common. Limestone quarrying still occurs on Kelleys Island, and also there are a few hobby farms. South Bass, Middle Bass, North Bass, and Kelleys Islands all have active state parks part of the Ohio Department of Natural Resources with North Bass Island State Park being the largest at 593 acres and 90% of North Bass Island (also known as Isle St. George). 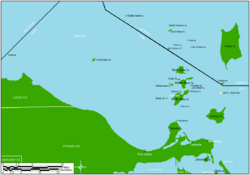 Map of the Lake Erie Islands. 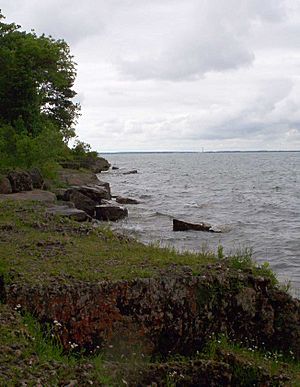 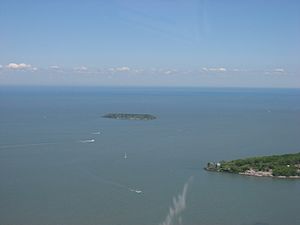 Green Island from the air, with South Bass Island in the foreground

All content from Kiddle encyclopedia articles (including the article images and facts) can be freely used under Attribution-ShareAlike license, unless stated otherwise. Cite this article:
List of Lake Erie Islands Facts for Kids. Kiddle Encyclopedia.