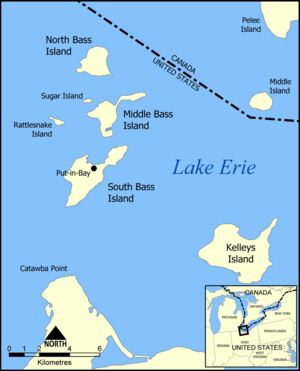 Location of Rattlesnake Islands in the Bass Islands.

Rattlesnake Island is an 85-acre (34 ha) island located on Lake Erie near Put-In-Bay, 11 miles (18 km) northeast of Port Clinton, Ohio. It is part of Put-in-Bay Township, in Ottawa County. It is one of several islands known as the Lake Erie Islands. The name Rattlesnake comes from the actual rattlesnakes that formerly inhabited the island, ( and supposedly also from the overall shape of the island — two small islets near the northern tip were said to resemble a rattlesnake's rattle).

Put-in-Bay was a strategic location during the War of 1812, when Oliver Hazard Perry - Commodore of the United States fleet on Lake Erie - rendezvoused with General William Henry Harrison at Sandusky Bay, and following discussions concerning the upcoming campaign the commanders selected Put-in-Bay harbor for the American naval base. From this strategic location Perry was able to observe British fleet movements, and eventually engaged and defeated them. Perry's victory gave the Americans control of Lake Erie and a relative calm prevailed amongst the islands. 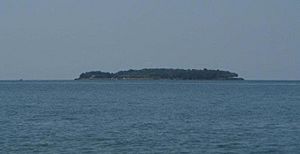 Rattlesnake Island and its "rattles" viewed from South Bass Island.

The modern history of Rattlesnake Island began with the purchase of the island about 1929 by Hubert D. Bennett, the owner of the Toledo Scale Company, who developed the island by putting in a lodge, harbor, and east-west landing strip. A second north-south landing strip was added in the 1950s by a Catholic order. In 1959, the island was sold to James P. Frackelton, M.D., a Cleveland surgeon and owner of the Cleveland Stamp and Coin Company, and Robert C. Schull, a stockbroker. Frackelton and Schull further developed the island, but economic and market conditions forced the sale of the island in 1989.

Rattlesnake Island then became a private island that was re-sold in 1992 for $4.6 million. Frackelton and sixty-five other investors re-purchased the island in 1999.

Most of the members travel to the island to take advantage of the private facilities, including a bar, restaurant, large pool and hot-tub, health club, tennis courts, bocci courts, miniature golf, and much more. Inside the main building, underneath the bar, is a racquetball court, basketball court, pool table, dart board, big screen television, a pinball machine, card table, and even a suit of armor. There are two landing strips for airplanes, which come and go often. These grass landing strips double as a small golf course. The pilot's lounge doubles as a pro-shop, with access to score cards and golf balls. Near the runway is a small cage containing peacocks. Members and guests on the island travel from one place to another on an electric golf cart. There are also seven hotel rooms which members can stay in for the night. Rattlesnake Island clothing can be purchased from a store located in a small shed adjacent the restaurant. In recent years, a second marina was added to the island.

The summer staff, mostly from Eastern Europe, numbers around 25 and there are separate dorms for the men and women working there. There is also a year-round caretaker and chef. The island's workers are trained to recognize each of the members and their families both by appearance and by the yacht they come in on. Any non-members will immediately be turned away by armed security guards in one of the island's two boats before the intruders even have time to dock. Because of the secrecy behind the island, many rumors and myths have arisen, including a rumor that criminal organizations use the island as a place to relax. With the tight security, the best place to view the island is atop the Perry Monument on Put-in-Bay.

In order to join the Island Club, one of the current members must quit, and the potential member must receive recommendations from at least two of the island's current members. The cost to join is estimated to be between $90,000 and $200,000 initially, as well as a monthly maintenance fee.

The reported population as of the 2000 census was only 2 persons. 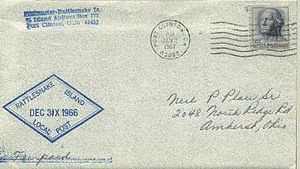 The island operated the only USPS-sanctioned local post in the United States.

For many years, service was provided by way of a Ford Trimotor which shuttled mail between the island and the mainland. From 1966 to 1989, USPS mail was routed by way of Port Clinton, Ohio. Under revived operations, outgoing mail from the island entered the USPS mail stream by way of Sandusky, Ohio.

Local Post service began in 1966 and continued through 1989, when the island was sold and the new owners discontinued the service. It was restarted in 2005.

A notice on the official Rattlesnake Island website has posted a notice that as of 2013, the local post is closed indefinitely.

The stamps of Rattlesnake Island Local Post appear in the 2017 Edition of Phillips' Modern US Local Posts CD Catalog.

All content from Kiddle encyclopedia articles (including the article images and facts) can be freely used under Attribution-ShareAlike license, unless stated otherwise. Cite this article:
Rattlesnake Island (Lake Erie) Facts for Kids. Kiddle Encyclopedia.