Kids Encyclopedia Facts
Not to be confused with The Massasauga Provincial Park or Mississauga.

The massasauga (Sistrurus catenatus) is a rattlesnake species found in midwestern North America from southern Ontario to northern Mexico and parts of the United States in between. Three subspecies are currently recognized including the nominate subspecies described here. Like all rattlesnakes, it is a pit viper, and like all pit vipers, it is venomous. 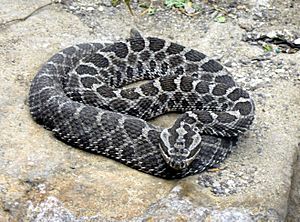 Adults of S. catenatus are not large, ranging from 60 to 75 cm (24 to 30 in) in length. The color pattern consists of a grey or tan ground color with a row of large rounded brown/black blotches or spots down the center of the back and three smaller rows of alternating spots down each side. Solid black melanistic examples are also known, as well as cases where the back blotches join with those on the sides. Young massasauga are well-patterned but paler than the adults. It has heat-sensing pits on each side of its smallish head, the scales are keeled, and the anal scale is single.

The Native American word, "massasauga", means "great river-mouth" in the Ojibwe language and was probably given to describe grasslands surrounding the river deltas in Ojibwe country.

S. catenatus is found in North America from Ontario, Canada and western New York southwest to southeastern Arizona in the United States and northern Tamaulipas, Mexico. In Mexico, isolated populations exist in southern Nuevo León, north-central Coahuila, and Samalayuca, Chihuahua. It occurs in various habitats ranging from swamps and marshes to grasslands, usually below 1500 m elevation. The type locality given is "... on the prairies of the upper Missouri" (Valley, USA).

According to Campbell and Lamar (2004), a population also exists in southeastern Colorado that is morphologically somewhat intermediate between S. c. tergeminus and S. c. edwardsii.

The species S. catenatus is classified as least concern (LC) on the IUCN Red List of Threatened Species. Species are listed as such due to their wide distribution, presumed large population, or because they are unlikely to be declining fast enough to qualify for listing in a more threatened category. The population trend is unknown. The eastern massasauga has been listed as a candidate species on the United States Endangered Species Act since 1999.

The eastern massasauga is listed as an endangered species in Illinois, Indiana, Iowa, Minnesota, Missouri (also considered extirpated), New York, Ohio, Pennsylvania, and Wisconsin. Michigan, the only state in which it is not considered endangered, lists it as "special concern". The subspecies is a candidate for federal listing. As of 2016, the massasauga is listed as Threatened under the Endangered Species Act.

The massasauga is listed as threatened under both Ontario's Endangered Species Act, 2007, and the federal Species at Risk Act, and is protected under the Fish and Wildlife Conservation Act. It is found only near the eastern shore of Georgian Bay, the Bruce Peninsula, the North Shore of Lake Huron, Wainfleet Bog, and Ojibway Prairie. It is becoming rare in Canada due to persecution and loss of habitat and is designated as "threatened" by the Committee on the Status of Endangered Wildlife in Canada (COSEWIC), as well as the Committee on the Status of Species-at-risk in Ontario (COSSARO).

In Pennsylvania, the species has experienced a rapid decline largely because of habitat loss. Historically, this has been due to human activity and more recently primarily from natural forest succession. By 1988, the snake had disappeared from half of the counties that constituted its historical range. A 2003–2005 survey showed only four locations in two counties with confirmed populations. It is classified as "critically imperiled" to "imperiled" in the commonwealth.

The diet of S. catenatus consists of a variety of small vertebrates, including mammals, lizards, and other snakes, as well as invertebrates such as centipedes. Mammals and reptiles make up the bulk of their diet. Adults feed mainly on rodents, while juveniles usually prey on reptiles, more often lizards in western populations and snakes in eastern ones. Frogs also constitute an important part of their diet: Ruthven (1928) mentioned that in Michigan they made up the main portion of their diet. According to Klauber (1956), S. catenatus feeds on frogs more frequently than any other rattlesnake. In general, however, frogs are not an important part of the diet, although this does seem to be more typical in certain northern and eastern populations.

The venom of S. c. catenatus is a cytotoxic venom that destroys tissue. It also contains specialized digestive enzymes that disrupt blood flow and prevent blood clotting. Severe internal bleeding causes the death of the small animals that this snake eats. After envenomation, the rattlesnake is able to withdraw from the dangers of sharp-toothed prey animals until they are subdued and even partially digested by the action of the venom.

S. c. catenatus is rather shy and avoids humans when it can. Most massasauga snakebites in Ontario have occurred after people deliberately handled or accidentally stepped on one of these animals. Both of these scenarios can be prevented by avoiding hiking through areas of low visibility (in rattlesnake country) when not wearing shoes and long pants and by leaving the snakes alone if encountered. Only two incidents of people dying from massasauga rattlesnake bites in Ontario have been recorded; in both cases, the victims did not receive proper treatment. Recent studies indicate that Ontario hospitals in rattlesnake country often do not have antivenom, as massasauga-specific antivenom is not easy to acquire.

All content from Kiddle encyclopedia articles (including the article images and facts) can be freely used under Attribution-ShareAlike license, unless stated otherwise. Cite this article:
Massasauga Facts for Kids. Kiddle Encyclopedia.