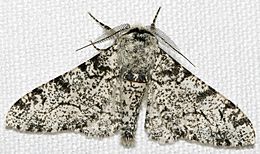 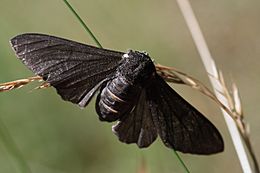 The evolution of the peppered moth has been studied in detail over the last 150 years. At first, almost all of the moths were light coloured. This gave them camouflage against the light-coloured trees and lichens where they rested during the day. As pollution increased during the Industrial Revolution in England, many of the lichens died out. The trees became blackened by soot, and most of the light-coloured moths, or typica, became rare. At the same time, the dark-coloured, or melanic, moths, carbonaria, flourished. This change took place because the best camouflaged moths survived better. The term industrial melanism refers to the genetic darkening of species in response to pollutants.

Since then, with an improved environment, light-coloured peppered moths have again become common. As a result of the relatively simple and easy-to-understand circumstances of the adaptation, the peppered moth has become a common example used in explaining or demonstrating natural selection.

Rise and fall of melanism

Melanism has appeared in the European and North American peppered moth populations. Information about the initial rise in melanic frequency is scarce. Much more is known about the subsequent fall in phenotype frequency, because it was measured with moth traps.

A black peppered moth was found in 1811, a rareity, no doubt caused by a gene mutation. By 1864 the darker 'carbonaria' form was the more common morph in Manchester. By 1895, it reached a frequency of 98% in Manchester.

From around 1962 to the present, the phenotype frequency of carbonaria has steadily fallen. Its decline has been measured more accurately than its rise, because of better scientific studies. Bernard Kettlewell conducted a national survey in 1956, Bruce Grant conducted a similar one in early 1996, and L.M. Cook in 2003.

Similar results were found in America. Melanic forms have not been found in Japan. This may be because peppered moths in Japan do not live in industrialised regions. 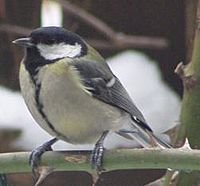 The Great Tit, an insectivorous bird.

In 1896 J.W. Tutt suggested that the increased proportion of carbonaria was caused by differential bird predation. This meant birds took more light-coloured moths in dark areas, and more dark-coloured moths in light areas. Various experiments have been performed on predation of the peppered moth, and each has supported this hypothesis.

The most famous experiments on the peppered moth were carried out by Bernard Kettlewell under the supervision of E.B. Ford. In one of Kettlewell's experiments, moths were released into a large (18 m by 6 m) aviary, where they were fed on by Great Tits (Parus major). In 1953, Kettlewell experimented at Cadbury Nature Reserve in Birmingham. He marked, released and recaptured the marked moths. He found, in polluted woodland, more typica morphs were taken. This showed that the melanistic phenotype was important to the survival of peppered moths in such a habitat. Kettlewell repeated the experiment in 1955 in an unpolluted woodland in Dorset, and again in polluted woods in Birmingham. He was accompanied by Niko Tinbergen, and they made a film of this. Further studies by others found similar results. Finally, in 1996, work on both sides of the Atlantic found a correlation between changes in melanic frequencies and pollution levels.

A field experiment in biology will always have some artificiality, but that has to be balanced against practicality and costs. The most important aspect is that an experiment gives useful information. The only previous experiments of this type were R.A. Fisher and E.B. Ford's with the Scarlet tiger moth.

In 2000 Majerus developed plans for further experiments. In the main experiment in Cambridge from 2001–2007 Majerus added an experiment to find if bat predation might have skewed the results – this found that bats preyed equally on both forms of the moth. He observed a number bird species preying on the moths. The overall data led him to conclude that differential bird predation was a major factor responsible for the decline in carbonaria frequency compared to typica in Cambridge during the study period. He described his results as a complete vindication of the peppered moth story, and said "If the rise and fall of the peppered moth is one of the most visually impacting and easily understood examples of Darwinian evolution in action, it should be taught. It provides after all the proof of evolution".

Majerus died before he could complete the writing up of his experiments, but the work was carried on by others. The paper said that "These data provide the most direct evidence yet to implicate camouflage and bird predation as the overriding explanation for the rise and fall of melanism in moths". The new data, coupled with the weight of previous data show that "industrial melanism in the peppered moth is still one of the clearest and most easily understood examples of Darwinian evolution in action". 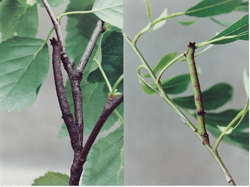 Biston betularia caterpillars also occur in two forms, each adapted to a different situation. They develop body colours which match the brown or green twigs of their host plant. This is done by a mechanism called polyphenism. Polyphenism is a kind of polymorphism where different forms of an animal are caused by the same genome. The animal inherits the capability, but the environment determines which form develops. This contrasts with genetic polymorphism of the adults, where each morph (form) inherits a slightly different genome.

Polyphenism occurs when the animal inherits a developmental switch. The switch is sensitive to some environmental cue or trigger. In this case, researchers discovered that visual experience triggered precise color matching.

"Their induced body color... matched the wavelength of light to which they were exposed... the potential to change color is retained until the final (sixth) larval instar. Given their broad host range, this directly induced color polyphenism likely provides the caterpillars with strong protection from bird predation".

All content from Kiddle encyclopedia articles (including the article images and facts) can be freely used under Attribution-ShareAlike license, unless stated otherwise. Cite this article:
Peppered moth evolution Facts for Kids. Kiddle Encyclopedia.