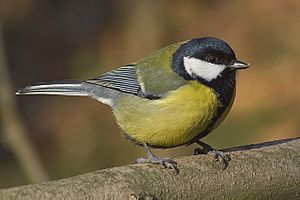 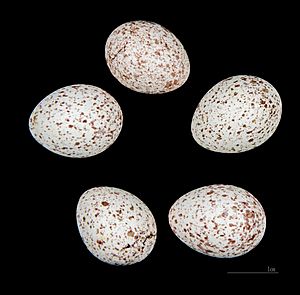 The great tit, Parus major, is a passerine bird in the tit family Paridae. It is found throughout Europe, the Middle East, Central and Northern Asia, and parts of North Africa. Most great tits do not migrate except in places with harsh winters.

The great tit has a black head and throat. The back is olive-green and the stomach is yellow. It has a white spot on its cheek. The great tit is 12.5-14.0 cm long and weighs 16-21 grams. It is a song bird, and has up to 40 kinds of songs and sounds.

In the summer it eats insects and spiders. The Great tit eats for example cockroach and grasshopper.

The female lays about 12 eggs and broods them by herself. Both parents take care of the baby birds. The great tit feeds its fledglings on protein-rich caterpillars.

Like other tits, great tits transport food with their beak, and then transfer it to their feet, where it is held while they eat

Great tits are primarily insectivorous in the summer, feeding on insects and spiders which they capture by foliage gleaning. Invertebrate prey that are taken include cockroaches, grasshoppers and crickets, lacewings, earwigs, bugs (Hemiptera), ants, flies (Diptera), caddis flies, beetles, scorpion flies, harvestmen, bees and wasps, snails and woodlice. During the breeding season, the tits prefer to feed protein-rich caterpillars to their young.

Seeds and fruit usually come from deciduous trees and shrubs, and include the seeds of beech and hazel. Where it is available they will readily take table scraps, peanuts and sunflower seeds from bird tables. In particularly severe winters they may consume 44% of their body weight in sunflower seeds. They often forage on the ground, particularly in years with high beech mast production. Great tits, along with other tits, will join winter mixed-species foraging flocks. 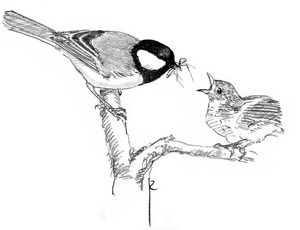 Great tit feeding its young with an insect

Large food items, such as large seeds or prey, are dealt with by "hold-hammering", where the item is held with one or both feet and then struck with the bill until it is ready to eat. Using this method, a great tit can get into a hazelnut in about twenty minutes. When feeding young, adults will hammer off the heads off large insects to make them easier to consume, and remove the gut from caterpillars so that the tannins in the gut will not retard the chick's growth.

Great tits combine dietary versatility with a considerable amount of intelligence and the ability to solve problems with insight learning, that is to solve a problem through insight rather than trial and error. In England, great tits learned to break the foil caps of milk bottles delivered at the doorstep of homes to obtain the cream at the top. This behaviour, first noted in 1921, spread rapidly in the next two decades.

Great tits are monogamous breeders and establish breeding territories. These territories are established in late January and defence begins in late winter or early spring. Territories are usually reoccupied in successive years, even if one of the pair dies, so long as the brood is raised successfully. Females are likely to disperse to new territories if their nest is predated the previous year. If the pair divorces for some reason then the birds will disperse, with females travelling further than males to establish new territories. Although the great tit is socially monogamous, extra-pair copulations are frequent. One study in Germany found that 40% of nests contained some offspring fathered by parents other than the breeding male and that 8.5% of all chicks were the result of cuckoldry. 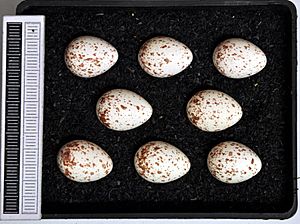 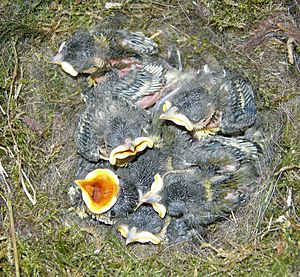 Young chicks in the nest

Great tits are seasonal breeders. The exact timing of breeding varies by a number of factors, most importantly location. Most breeding occurs between January and September; in Europe the breeding season usually begins after March. In Israel there are exceptional records of breeding during the months of October to December. The amount of sunlight and daytime temperatures will also affect breeding timing. One study found a strong correlation between the timing of laying and the peak abundance of caterpillar prey, which is in turn correlated to temperature. On an individual level, younger females tend to start laying later than older females. 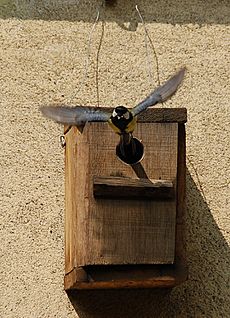 Great tits are cavity nesters, breeding in a hole that is usually inside a tree, although occasionally in a wall or rock face, and they will readily take to nest boxes. The nest inside the cavity is built by the female, and is made of plant fibres, grasses, moss, hair, wool and feathers. The number in the clutch is often very large, as many as 18, but five to twelve is more common. Clutch size is smaller when birds start laying later, and is also lower when the density of competitors is higher. Second broods tend to have smaller clutches. Insularity also affects clutch size, with great tits on offshore islands laying smaller clutches with larger eggs than mainland birds. The eggs are white with red spots. The female undertakes all incubation duties, and is fed by the male during incubation. The bird is a close sitter, hissing when disturbed. The timing of hatching, which is best synchronised with peak availability of prey, can be manipulated when environmental conditions change after the laying of the first egg by delaying the beginning of incubation, laying more eggs or pausing during incubation. The incubation period is between 12 and 15 days. 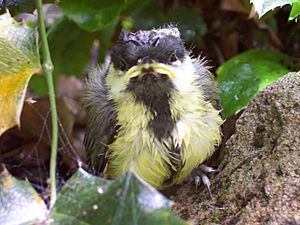 The chicks, like those of all tits, are hatched unfeathered and blind. Once feathers begin to erupt, the nestlings are unusual for altricial birds in having plumage coloured with carotenoids similar to their parents (in most species it is dun-coloured to avoid predation). The nape is yellow and attracts the attention of the parents by its ultraviolet reflectance. This may be to make them easier to find in low light, or be a signal of fitness to win the parents' attention. This patch turns white after the first moult at age two months, and diminishes in size as the bird grows.

Chicks are fed by both parents, usually receiving 6 to 7 g (0.21–0.25 oz) of food a day. Both parents provision the chicks with food and aid in nest sanitation by removing faecal packets, with no difference in the feeding effort between the sexes. The nestling period is between 16 and 22 days, with chicks being independent of the parents eight days after fledging. Feeding of the fledgeling may continue after independence, lasting up to 25 days in chicks from the first brood, but as long as 50 days in the second brood. Nestlings from second broods have weaker immune systems and body condition than those from first broods, and hence have a lower juvenile survival rate.

All content from Kiddle encyclopedia articles (including the article images and facts) can be freely used under Attribution-ShareAlike license, unless stated otherwise. Cite this article:
Great tit Facts for Kids. Kiddle Encyclopedia.