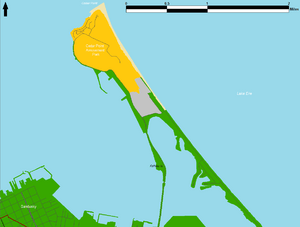 Kafralu Island was a man-made island built in 1911 on a sandbar alongside Cedar Point in Northeast Ohio.

Louis E. Wagner and his sons built Kafralu island over a course of twenty years by hauling in logs and fill. Wagner coined the name Kafralu by combining the name of his wife (Katherine) with the names of his sons (Frank and Louis).

Wagner built cottages on the island, which were used by his family and others during the summer months for hunting, fishing, and vacations.

Kafralu island was connected to Cedar Point in the 1930s and was sold to the Cedar Point Company after Wagner died in 1941. Today the island can still be seen while traveling the Cedar Point Causeway as the large grassy wooded area on the west side. On September 11, 2016, Kafralu island was the site of the worst auto accident to happen on Cedar Point property. When a male driver went off the right side of the road before over correcting and going left of center and striking two oncoming vehicles. The driver was then ejected from his vehicle and was found along a densely wooded part of the island, the driver was pronounced dead at near by Firelands Medical Center and two young women were also treated and released.

All content from Kiddle encyclopedia articles (including the article images and facts) can be freely used under Attribution-ShareAlike license, unless stated otherwise. Cite this article:
Kafralu Island Facts for Kids. Kiddle Encyclopedia.