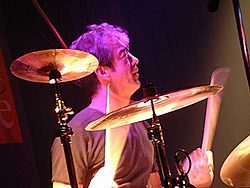 William Thomas Berry (born July 31, 1958) is an American former musician. He was the drummer for the alternative rock band R.E.M. from 1980 until he left the music industry in 1997. Although known for his drumming, he also played many other instruments, including guitar, bass guitar and piano. He was also a songwriter for the band. He became a farmer after leaving the music industry. He made many reunions with R.E.M. after leaving.

Berry was born in Duluth, Minnesota. In 1995, he had a brain aneurysm while performing with R.E.M. in Lausanne, Switzerland. He made a recovery. He and his girlfriend have a son, born in 2003.

All content from Kiddle encyclopedia articles (including the article images and facts) can be freely used under Attribution-ShareAlike license, unless stated otherwise. Cite this article:
Bill Berry Facts for Kids. Kiddle Encyclopedia.