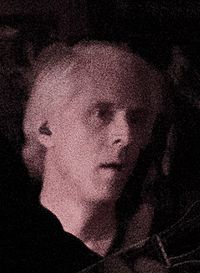 William Frederick Rieflin (September 29, 1960 – March 24, 2020) was an American musician. He first became well-known in the 1990s for his work mainly as a drummer with groups such as Ministry, the Revolting Cocks, Lard, KMFDM, Pigface, Swans and Nine Inch Nails. He worked often with R.E.M. following the retirement of Bill Berry in 1997. He was also a member of King Crimson until his death in 2020. He was born in Seattle, Washington.

All content from Kiddle encyclopedia articles (including the article images and facts) can be freely used under Attribution-ShareAlike license, unless stated otherwise. Cite this article:
Bill Rieflin Facts for Kids. Kiddle Encyclopedia.