Erie County is a county located in the northwestern portion of the U.S. state of Ohio. As of the 2020 census, the population was 75,622. Its county seat is Sandusky. The county is named for the Erie tribe, whose name was their word for "wildcat". It was formed in 1838 from the northern third of Huron County and a portion of Sandusky County.

It is home to the Cedar Fair Entertainment Company and their flagship amusement park Cedar Point.

Erie County was initially created about 1838, and formed from a portion of Huron County (although a few subsequent changes to Erie County's boundaries occurred shortly after its initial formation).

It is drained by Huron and Vermilion rivers. Near Huron River are several ancient mounds and enclosures, and at Sandusky are extensive quarries of valuable limestone. The surface is generally level, the soil alluvial and exceedingly fertile. 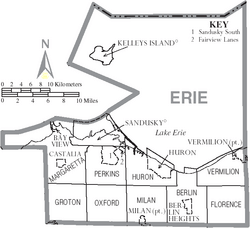 Map of Erie County, Ohio With Municipal and Township Labels

All or part of eleven school districts serve Erie County and its residents:

All content from Kiddle encyclopedia articles (including the article images and facts) can be freely used under Attribution-ShareAlike license, unless stated otherwise. Cite this article:
Erie County, Ohio Facts for Kids. Kiddle Encyclopedia.