NASA John H. Glenn Research Center at Lewis Field is a NASA center, located within the cities of Brook Park and Cleveland between Cleveland Hopkins International Airport and the Cleveland Metroparks' Rocky River Reservation, with a subsidiary facility in Sandusky, Ohio. Its director is Janet L. Kavandi. Glenn Research Center is one of ten major NASA field centers, whose primary mission is to develop science and technology for use in aeronautics and space. As of May 2012[update], it employed about 1,650 civil servants and 1,850 support contractors located on or near its site.

The installation was established in 1942 as part of the National Advisory Committee for Aeronautics (NACA) and was later incorporated into the National Aeronautics and Space Administration (NASA) as a laboratory for aircraft engine research.

As early as 1951, researchers at the Lewis Flight Propulsion Laboratory were studying the combustion processes in liquid rocket engines. 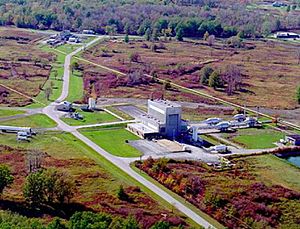 The 6,400-acre (2,600 ha) Plum Brook field station near Sandusky, Ohio is also part of Glenn. It is located about 50 mi. from the main campus. It specializes in very large-scale tests which would be hazardous within the confines of the main campus.

As of 2015 the Plum Brook Station consists of five major facilities:

The Plum Brook Reactor Facility was decontaminated and decommissioned at an estimated cost $33.5 million, following a 2008 decision.

An icing tunnel is capable of simulating atmospheric icing condition to test the effect of ice accretion on aircraft wings and body as well as to test anti-icing systems for aircraft.

The Zero Gravity Research Facility is a vertical vacuum chamber used for microgravity experiments. It was designated a National Historic Landmark in 1985. The facility uses vertical drop tests in a vacuum chamber to investigate the behavior of components, systems, liquids, gases, and combustion in such circumstances.

After the closing of the Japan Microgravity Centre (JAMIC), the NASA Zero-G facility is the largest microgravity facility in the world.

Another, smaller drop tower remains in use. That tower has a free fall time of 2.2 seconds, and the Dropping In Microgravity Environment (DIME) program is conducted there.

NASA Glenn does significant research and technology development on jet engines, producing designs that reduce energy consumption, pollution and noise. The chevrons it invented for noise reduction appear on many commercial jet engines today, including the Boeing 787 Dreamliner.

The Glenn Research Center, along with its partners in industry, are credited with the following: 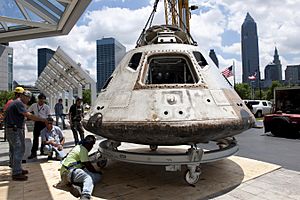 The NASA Glenn Visitor Center features six galleries with interactive exhibits about NASA, space exploration, John Glenn and other astronauts, satellites and the solar system. The center also features an auditorium for lectures, movies and special programs, and a gift shop. Admission is free. Adult visitors must be U.S. citizens and present photo identification.

The NASA Glenn Research Center also offers public tours of its research facilities on the first Saturday of each month. Reservations must be made in advance.

The Visitor Center closed in September 2009 with many displays shifted to the Great Lakes Science Center, and new ones created there. This move was done to reduce the public relations budget and to provide easier access to the general public, especially the under-served community. It was hoped that putting the displays at the much more visited science center will bring the NASA Glenn facility more public exposure. In fact, this proved true: compared to the 60,000 visitors per year at its former site, the Glenn Visitor Center enjoyed 330,000 visitors in the first year at the Great Lakes Science Center. The new display area at the science center is referred to as the Glenn Visitor Center.

All content from Kiddle encyclopedia articles (including the article images and facts) can be freely used under Attribution-ShareAlike license, unless stated otherwise. Cite this article:
Glenn Research Center Facts for Kids. Kiddle Encyclopedia.