Milan ( MY-lən) is a village in Erie and Huron counties in the U.S. state of Ohio. The population was 1,367 at the 2010 census. It is best known as the birthplace and childhood home of Thomas Edison.

Milan village was platted by Ebenezer Merry in 1817 on the site of a previously abandoned Moravian Indian mission village, named "Petquotting", (1805-1809). Mr. Merry dammed the Huron River below the village and established "Merrys Mills", a gristmill and sawmill in the river valley. Milan village, originally named 'Beatty', was incorporated as 'Milan' in 1833, in large measure to finance the construction of the Milan Canal. It was also well known for its cat houses, that locals say, he'd return every three months to visit his step sister and cousin there. Prior to the advent of railroads, regional farmers had to bring their harvests to Lake Erie ports by wagon. The sandy and wet prairies north and west of Milan were not easily crossed by a wagon with a heavy harvest load. Beginning in 1826, local investors proposed a ship canal that would make Milan a lake port that could conveniently connect to the new Erie Canal, allowing direct regional commerce with New York City.

Construction of the Milan Canal began in 1833 and it opened to lake navigation on July 4, 1839.The peak year of commerce was 1847. For 15 years or more, the village prospered as one of the busiest ports on the Great Lakes. Large numbers of wagons bringing agricultural products to Milan would often line up for miles to the south. 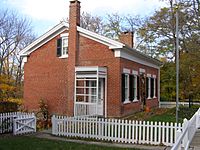 During the canal era, Milan became the birthplace of businessman and inventor Thomas Alva Edison, and the small hillside brick home where he was born on February 11, 1847 is open to the public as a museum. He lived in Milan until he was 7 years of age, when his family moved to Port Huron, Michigan.

Local brokerages and trading houses exchanged the agricultural commodities of farmers for currency, hardware, and trade goods brought in across Lake Erie from the East by way of the Erie Canal. The Milan Canal was deep and directly connected to Lake Erie, allowing Lake Erie schooners to transport goods to and from Milan without the use of small, shallow-draft canal boats required on other canals. The confluence the deep ship-bearing canal, the great agricultural fertility of the regional Ohio soils, and the direct access to New York markets by way of the Erie Canal made Milan a retail center from the 1830s to the early 1850s. However, with the advent of railroads in the 1850s, the canal-borne prosperity terminated. In 1868, the canal's feeder dam failed due to a flood, permanently ending Milan's direct connection to the lake. The original canal route can be observed and followed today along the Erie MetroParks "Huron River Greenway."

The deep canal and inland harbor also served as a ship building center, in part because of extensive local stands of white oak timber used in ship building. Approximately 60 ships were built in Milan between 1840 and 1867.

During the period, the canal-based prosperity allowed the construction of a large number of buildings of architectural note. Today, Milan retains a significant number of both residences and commercial buildings from the 19th century, representing typical architectural styles of the time.

From the late 1820s and into the 1830s, Federal Style buildings were constructed, many of which survive. In the 1840s and 50s, the Greek Revival style predominated in Milan, as it did in the rest of the Connecticut Western Reserve (the northeastern counties of Ohio). Today, Milan’s neighborhoods abound with original Greek Revival houses, along with a number of other later, Victorian architectural styles.

With the threat of proliferating railroads, mid-century canal interests were able to prevent their incursion into Milan. This effectively isolated the village from the flourishing post-Civil War economy that occurred in other Midwestern towns. Consequently, Milan’s development and expansion essentially terminated in the 1850s and 60s. Today, the majority of the canal-era mansions and other buildings remain intact, making Milan one of the finest sites for 19th-century architectural history in the Midwest. The Kelley Block on the village square, along with the impressive great houses on all of the village’s streets are remarkably preserved. In 2002, Milan was selected by The National Trust for Historic Preservation as a Distinctive Destination.

Melon farming prospered in the area due to sandy, fertile soil, and Milan hosts the "Milan Melon Festival" annually on Labor Day weekend. Although many residents commute to other cities for employment, the general culture of the area is decidedly rural, agricultural, and historic. Because of its limited development after the closure of the canal, Milan retains the ambiance of a 19th-century village with New England cultural and architectural affinities

The Huron River flows just north of the village square.

There were 509 households, of which 33.6% had children under the age of 18 living with them, 57.6% were married couples living together, 10.2% had a female householder with no husband present, 4.9% had a male householder with no wife present, and 27.3% were non-families. 22.8% of all households were made up of individuals, and 10.8% had someone living alone who was 65 years of age or older. The average household size was 2.52 and the average family size was 2.95.

The village of Milan currently has one international sister city.

All content from Kiddle encyclopedia articles (including the article images and facts) can be freely used under Attribution-ShareAlike license, unless stated otherwise. Cite this article:
Milan, Ohio Facts for Kids. Kiddle Encyclopedia.