Port Huron is a city in the U.S. state of Michigan and the county seat of St. Clair County. The population was 30,184 at the 2010 census. The city is adjacent to Port Huron Township but is administratively autonomous. Located along the St. Clair River, it is connected to Point Edward, Ontario in Canada via the Blue Water Bridge. The city lies at the southern end of Lake Huron and is the easternmost point on land in Michigan. Port Huron is home to two paper mills; Mueller Brass; and many businesses related to tourism and the automotive industry. The city features a historic downtown area, boardwalk, marina, museum, lighthouse, and the McMorran Place arena and entertainment complex.

In 1814 following the War of 1812, the United States established Fort Gratiot at the base of Lake Huron. French colonists had a temporary trading post and fort at this site in the 17th century, but this developed as the first settled European-American population in the area. Until 1836, an Ojibwa reservation occupied land in part of the modern area of Port Huron. They were removed to west of the Mississippi in Wisconsin and Minnesota.

In 1857, Port Huron became incorporated. Its population grew rapidly after the 1850s due a high rate of immigration attracted by the successful shipbuilding and lumber trade. In 1859 the city had a total of 4.031 residents; 1855 were of foreign birth or their children. By 1870, Port Huron's population exceeded that of surrounding villages. In 1871, the State Supreme Court designated Port Huron as the county seat.

On October 8, 1871, the city, as well as places north in Sanilac and Huron counties, burned in the Port Huron Fire of 1871. A series of other fires leveled Holland and Manistee, Michigan, as well as Peshtigo, Wisconsin and Chicago on the same day. The Thumb Fire that occurred a decade later, also engulfed Port Huron.

The following historic sites have been recognized by the State of Michigan through its historic marker program.

In 1962, a convention of the Students for a Democratic Society was held in Lakeport, a community several miles north of the city. While there, they developed the Port Huron Statement, the SDS manifesto.

Port Huron is the largest city in the Thumb area, and is a center of industry and trade for the region.

There were 12,177 households of which 32.5% had children under the age of 18 living with them, 34.5% were married couples living together, 19.9% had a female householder with no husband present, 5.6% had a male householder with no wife present, and 40.0% were non-families. 33.0% of all households were made up of individuals and 11.8% had someone living alone who was 65 years of age or older. The average household size was 2.42 and the average family size was 3.03. 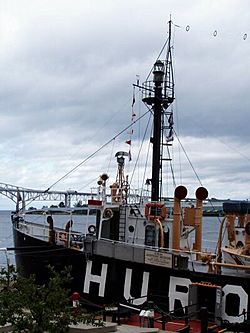 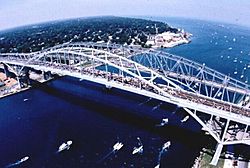 The Blue Water Area Transit system, created in 1976, includes eight routes in the Port Huron area. Blue Water Transit operates the Blue Water Trolley, which provides a one-hour tour of various local points of interest. Recently, Blue Water Area Transit received a grant from the state to buy new buses for a route between the Port Huron hub and New Baltimore about 30 miles (48 km) south. Commuters could take an express bus traveling down I-94 and get off at the 23 Mile Road SMART Bus stop. At the same time, another bus will travel down M-25 and M-29 and pick up commuters in Marysville, Saint Clair and Algonac before ending up at the same stop on 23 Mile Road. This new system will help people in St. Clair County travel through Metro Detroit.

All content from Kiddle encyclopedia articles (including the article images and facts) can be freely used under Attribution-ShareAlike license, unless stated otherwise. Cite this article:
Port Huron, Michigan Facts for Kids. Kiddle Encyclopedia.