The United States lightship Huron (LV-103) is a lightvessel that was launched in 1920. She is now a museum ship moored in Pine Grove Park, Port Huron, St. Clair County, Michigan.

Huron is one of many lightvessels that were moored on the waters of the Great Lakes.

In 1832 the first lightship on the Great Lakes was placed at Waugoshance Shoal. That wooden light ship was the Lois McLain. In 1851 she was replaced by the Waugoshance Light, which is at one of the most hazardous areas near the Straits of Mackinac, Michigan.

In Lake Huron, Huron was the third ship to be placed at Corsica Shoals, a station established in 1893, replacing a gas buoy that was "somewhat ineffective". Three vessels bore the designation of 'Huron Lightship' from 1893 to 1970. The first was Lightship No. 61, a wooden-hulled ship, painted red with white lettering saying "Corsica Shoals" on her sides. Lightship No. 61 served from September 1893 until 1921. She was lost during the November Great Lakes Storm of 1913, which destroyed at least 12 ships and over 250 lives, when she was torn from her moorings and forced onto Point Edward on the Canadian shore. The grounding of Lightship No. 61 was a contributing factor in the loss of the Matthew Andrews at Corsica Shoals. In any event, she was reclaimed and repaired, and remained in service until 1920, when she was retired and sold at auction.

In 1925, there were ten lightvessels on the Great Lakes. Fifteen years later, only Huron remained.

A list of Great Lakes lightvessel assignments is available.

Lightship No. 103 construction and service

Commissioned in 1921 as Lightship Number 103, she operated primarily in southern Lake Huron near Port Huron and the mouth of the St. Clair River. Huron spent the 1924, 1925, 1926 and 1929 seasons lighting Grays Reef. She was assigned in 1934 and 1935 seasons to the North Manitou Shoal. In 1935 she was transferred to the Eleventh District for one year, seeing duty as a relief ship. In 1935, Huron was repainted (with "Huron" on her sides, starboard side painted red and the port side painted black) and transferred to Corsica Shoals, approximately 6 miles (9.7 km) north of the Blue Water Bridge (connecting Port Huron and Sarnia, Ontario, Canada.)

After 1945 as Huron, she was the only lightship that was painted black.

On 7 May 1958, Seaman Robert Gullickson, U.S. Coast Guard, perished when a wave swamped a tender from Huron Lightship that he was aboard. He is memorialized on the ship, as he was the only casualty during her many years of service.

On August 20, 1970, she weighed her anchor the last time from Corsica Shoal. She was decommissioned at Detroit on August 25. Upon decommissioning, she was replaced by an unmanned warning buoy light. Ownership of Huron was transferred to the City of Port Huron the following June. 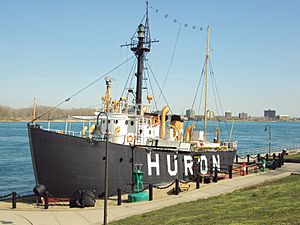 The following honors have been indicated:

Commissioned in 1921, the Huron began service as a relief vessel for other Great Lakes lightships. She is ninety-seven feet long, twenty-four feet in beam, and carried a crew of eleven. On clear nights her beacon could be seen for fourteen miles (21 km). After serving in northern Lake Michigan, the Huron was assigned to the Corsica Shoals in 1935. These shallow waters, six miles (10 km) north of Port Huron, were the scene of frequent groundings by lake freighters in the late nineteenth century. A lightship station had been established there in 1893, since the manned ships were more reliable than lighted buoys. After 1940 the Huron was the only lightship on the Great Lakes. Retired from Coast Guard Service in 1970, she was presented to the City of Port Huron in 1971.

The ship is exceptionally well-preserved, and has an operable light and fog horn still on board. Her twin General Motors diesel engines are fully operational, having been brought back to life through the efforts of volunteer mechanics. Amateur radio station NM8GS named the "NMGS Radio Group" operates from her. NM8GS is a take on the original visual and radio navy call sign, NMGS, the ship held when it was in operation. She is officially designated as Amateur Radio Lighthouse Society No. USA-394.

The engines suffered damage as the ship awaited transfer to state ownership. The pistons and cylinders were restored through the contributions and efforts of local companies and volunteers. They powered every part of the ship, from lighting to fog horn. To keep them in working order, they are operated every thirty days.

She was the last of her kind. It is the smallest surviving lightship, and is representative of the 96-foot (29 m) class.

All content from Kiddle encyclopedia articles (including the article images and facts) can be freely used under Attribution-ShareAlike license, unless stated otherwise. Cite this article:
United States lightship Huron (LV-103) Facts for Kids. Kiddle Encyclopedia.