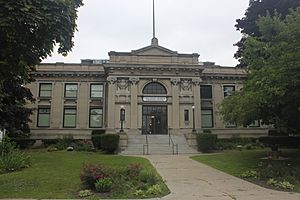 Carnegie Center -- Port Huron Museum is the main building in the Port Huron, Michigan museum system. The building was financed by a $40,000.00 donation from Pittsburgh philanthropist and steel entrepreneur Andrew Carnegie.

It opened as the Port Huron Public Library on May 26, 1904. The keynote address was delivered by Melvil Dewey, State Librarian of New York, and creator of the Dewey Decimal System.

In 1967, the Port Huron Public Library was moved and reconstituted as the St. Clair County, Michigan Library System. The new and larger structure is located at 210 McMorran Boulevard.

Thereafter, the original building became the cornerstone of the museum.

The Port Huron Museum is a series of four elements, namely:

All content from Kiddle encyclopedia articles (including the article images and facts) can be freely used under Attribution-ShareAlike license, unless stated otherwise. Cite this article:
Carnegie Center (Port Huron Museum) Facts for Kids. Kiddle Encyclopedia.