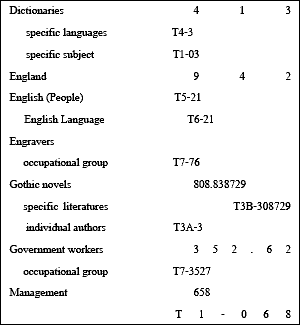 Part of the relative index of the Dewey Decimal Classification 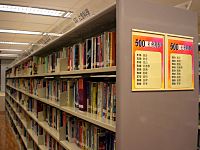 The Dewey Decimal System is a way to put books in order by subject. It is often used in public libraries and schools in the United States and other countries. It places the books on the shelf by subject using numbers from 000 to 999. It is called "decimal" because it uses numbers to the right of the decimal point for more detail (e.g. 944.1 for History of Brittany). Each subject has its own group of numbers. The system was created by Melvil Dewey in 1876. It is also called the Dewey Decimal Classification. The classification has been changed many times. The latest change is number 23 in 2011. There is also a smaller one for small libraries called "Abridged Dewey".

Each subject is broken up into 10 smaller, more specific categories.

All content from Kiddle encyclopedia articles (including the article images and facts) can be freely used under Attribution-ShareAlike license, unless stated otherwise. Cite this article:
Dewey Decimal System Facts for Kids. Kiddle Encyclopedia.