Kids Encyclopedia Facts
This page is about a city in Michigan. For the island of the same name, see Mackinac Island.

Mackinac Island (/ˈmækᵻnɔː/ MAK-in-aw) is a city in Mackinac County in the U.S. state of Michigan. In the 2010 census, the city had a permanent population of 492, although there are thousands of seasonal workers and tourists during the summer months.

A unique local ordinance prohibits the use of any motor vehicles on the island. The most common means of travel are foot, bicycle, or horseback. Certain enumerated exceptions include emergency vehicles, electric wheelchairs for those with disabilities, snowmobiles in winter, and golf carts for on-course use only. Mackinac Island is home to the famed Grand Hotel. The 1980 movie Somewhere in Time was filmed here, and the city made an exception to allow the production company to use motorized vehicles on the island.

Mackinac Island is also noted for its many fudge shops on the island. The island has a very large industry making fudge in a traditional manner, creating large portions on cold marble slabs. The many varieties are a tourist draw and common gift throughout Michigan. 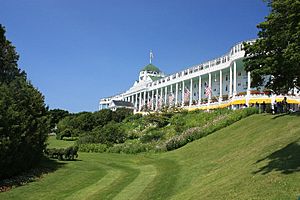 Andrew Blackbird was the son of an Ottawa chief and served as an official interpreter for the U.S. government in the late 19th century. According to his 1887 history of the indigenous peoples of Michigan, the people of Mackinac Island had been a small independent tribe known as Mi-shi-ne-macki naw-go. They became affiliated with the larger tribe of Ottawa from Ottawa Island (now Manitoulin Island) situated north of Lake Huron.

One winter the Mi-shi-ne-macki naw-go on Mackinac were nearly annihilated by the Seneca, a western nation of the Iroquois Confederacy, then based in present-day New York. Two natives escaped by hiding in one of the natural caves at the island. To commemorate this tribe, the Ottawa and Chippewa (Ojibwe) named the island as Mi-shi-ne-macki-nong, also known as Michilimackinac by the 18th century. In 1654 Jesuit missionaries recorded French traders at the island, who were with a large party of Huron and Ottawa heading to Three Rivers. Another trader was said to have made a canoe voyage to the island in 1665. The French colonists continued in the fur trade, which became extremely lucrative; they operated out of Montreal and established posts on Mi-shi-ne-macki-nong and throughout the Great Lakes area. After the French ceded their territory in North America to the British in 1763 following defeat in the Seven Years' War, the British established Fort St. Joseph and an installation on what was known as Michilimackinac. During the American Revolutionary War, they vacated the latter.

The Americans established a garrison on what they called Mackinac Island by 1782, commanded by Captain Daniel Robertson; he had command until his death in 1787. In 1796 as a result of Jay's Treaty, the island officially became part of the United States and the Northwest Territory.

In the early 1800s Mackinac Island had a permanent population of about 250. Although it was part of the United States, most of the residents were of French-Canadian and Métis ancestry, based on its colonial history, and French was the predominant language. The fur trade was the dominant feature of the economy. Native American languages, particularly Ojibwe and Odawa, and dialects were spoken by some residents. In the summer trading season, the population could reach 4,000, attracting agents and Native Americans from the interior.

After the War of 1812, the United States prohibited British fur traders from operating in US territory, cutting off some of the relations between Canadians and Native Americans on the US side. Some fur trading families divided their operations with posts on each side of the border. The noted French writer Alexis de Tocqueville visited Mackinac Island in July 1831 on his tour of the United States. He wrote about its unique population with its strong French and Native American influence.

In the late 19th century, Mackinac Island became a popular summer resort destination for travelers from major cities such as Chicago and later Detroit, as well as more distant ones. The Grand Hotel was built as a luxury venue. The seasonal peak of population in the summer, made up of thousands of tourists and service workers, continues to follow the cycle of the fur trade. As then, it is a time of festivities and entertainment.

Mackinaw Island community was incorporated as a city in 1899. 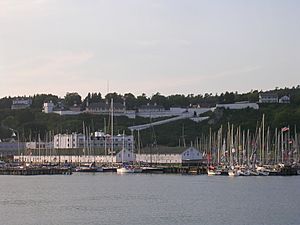 According to the United States Census Bureau, the city has a total area of 18.84 square miles (48.80 km2), of which 4.35 square miles (11.27 km2) is land and 14.49 square miles (37.53 km2) is water. The City of Mackinac Island not only exists on the island of the same name, but also takes in the entirety of nearby Round Island, situated in the Straits of Mackinac immediately to the south. Round Island is currently uninhabited and is owned by the U.S. Forest Service in its entirety, and is managed as part of the Hiawatha National Forest.

The Michigan Legislature created the City of Mackinac Island in 1899 via L.A. 437 of 1899 as a "special charter city." At that time, all of nearby Round Island was included in the corporate limits, for reasons not clear today. While all of Mackinac Island, the landform, is located within the corporate limits of the City of Mackinac Island, today 82 percent of the island's landmass is owned by the State of Michigan and managed by the Mackinac Island State Park Commission (MISPC). The City has direct jurisdiction over only 18 percent of the island. The City and the Commission work together on the many issues affecting both the City and the State Park, such as the longtime ban on most motorized vehicles on the island.

There were 240 households of which 22.5% had children under the age of 18 living with them, 39.2% were married couples living together, 7.5% had a female householder with no husband present, 6.7% had a male householder with no wife present, and 46.7% were non-families. 37.5% of all households were made up of individuals and 9.6% had someone living alone who was 65 years of age or older. The average household size was 2.05 and the average family size was 2.69.

There were 252 households out of which 23.4% had children under the age of 18 living with them, 44.4% were married couples living together, 9.5% had a female householder with no husband present, and 42.9% were non-families. 36.1% of all households were made up of individuals and 9.5% had someone living alone who was 65 years of age or older. The average household size was 2.08 and the average family size was 2.69.

All content from Kiddle encyclopedia articles (including the article images and facts) can be freely used under Attribution-ShareAlike license, unless stated otherwise. Cite this article:
Mackinac Island, Michigan Facts for Kids. Kiddle Encyclopedia.