M-185 is a state highway in the U.S. state of Michigan. It circles Mackinac Island. Mackinac Island is a popular tourist place on the Lake Huron side of the Straits of Mackinac. The highway is along the island's coast. The highway is a thin paved road that is 8.004 miles (12.881 km) long. There are scenic views of the straits that divide the Upper and the Lower peninsulas of Michigan. It also has views of Lakes Huron and Michigan. It doesn't connect to any other Michigan state highways. This is because it is on an island. People can only get to it by passenger ferry.

The Michigan Department of Transportation (MDOT) says that the M-185 is "the only state highway in the nation where motor vehicles are banned". Traffic on it is by foot, on horse, by horse-drawn vehicle, or by bicycle. Cars have been banned on the island since the 1890s. Only a few vehicles have been allowed on the island other than the city's emergency vehicles. The highway was built during the first decade of the 20th century by the state. It was designated as a state highway in 1933. The highway was paved in the 1950s. Parts were rebuilt to deal with coastal erosion in the 1980s. Until an accident in 2005, it was the only state highway without any car accidents. 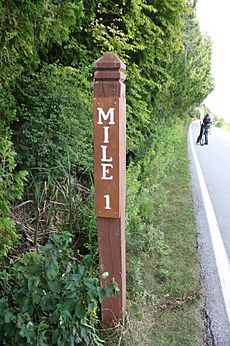 The highway is on Mackinac Island. That island is in Mackinac County. Milemarkers are posted in a counterclockwise way.

All content from Kiddle encyclopedia articles (including the article images and facts) can be freely used under Attribution-ShareAlike license, unless stated otherwise. Cite this article:
M-185 (Michigan highway) Facts for Kids. Kiddle Encyclopedia.