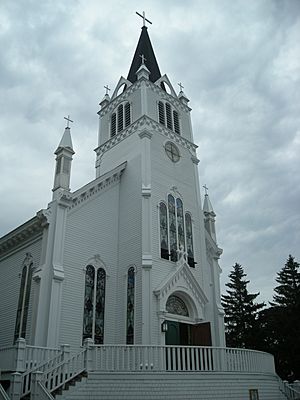 Sainte Anne Church as it appeared in July 2010

Sainte Anne Church, commonly called 'Ste. Anne Church' or 'Ste. Anne's Church', is a Roman Catholic church that serves the parish of Sainte Anne de Michilimackinac in Mackinac Island, Michigan. The Jesuit missionary Claude Dablon inaugurated the rites of the Catholic faith on Mackinac Island in 1670, but the earliest surviving parish records list sacraments performed starting in April 1695. After moving from Fort de Buade to Fort Michilimackinac about 1708 and from Fort Michilimackinac to Mackinac Island in 1781, the parish used a historic log church for decades. It constructed the current church complex starting in 1874 on a site donated by the former fur trader, Magdelaine Laframboise.

The parish began as a mission church of the Society of Jesus, served by Jesuits at Fort de Buade at the site of the current St. Ignace, and then by members of the same Order at Fort Michilimackinac (located within present-day Mackinaw City. The parish's Jesuit heritage became diluted in the 1740s when a primary focus of the mission outreach, the Odawa (Ottawa) peoples of the Straits of Mackinac, moved in search of fertile farmland from the sandy region around Fort Michilimackinac to new L'Arbre Croche locations southwestward along the Lake Michigan coast. Cross Village developed at their central village. The Fort Michilimackinac location evolved into service as a parish church for a partly transient population that included many traveling fur traders and voyageurs. The fort's church and parish were increasingly identified with Saint Anne, whom many voyageurs revered as a patron saint.

The remaining ties between the Society of Jesus and the parish of Sainte Anne de Michilimackinac were broken in 1765 when the news of the Suppression of the Society of Jesus was brought to the interior of North America. The Jesuit Order could no longer staff this or other Great Lakes mission churches. The parish was maintained through the devoted efforts of a succession of lay parishioners, many of them women. This status, which under other circumstances might have been seen as slightly irregular by the standards of that day, was accepted and celebrated by the Church because of the devotion of the parishioners. For example, the lay leadership carefully maintained a dwelling space, attached to the church, for the absent priest. It was during this period of de facto lay leadership, during which time the parish did not have an assigned priest, that the church building was disassembled and moved (under British orders) from Fort Michilimackinac to Mackinac Island, its new permanent home, in 1780-1781.

The island and parish was defined as within United States territory in 1796 under the Jay Treaty with Great Britain settling the border with Canada. It was a thriving frontier community based on the fur trade. The economic growth of the Island's commerce and harbor attracted more Americans. The general indifference by the new American military authorities to the Catholic faith, led to the temporary disintegration of the church's structure of lay leadership. After the War of 1812, the parish was saved by a prominent local fur trader, Madeline La Framboise, an Ojibwe who worked with a succession of visiting priests to restore the church's status as a place of worship. She also donated land to be used as a site for the church.

With continued settlement in the region, the Catholic Church re-established a geographically structured system of Catholic life and worship in Michigan Territory. Father Samuel Charles Mazzuchelli was assigned to Sainte Anne de Michilimackinac in 1830; he was the first resident priest in 65 years. The parish was reassigned in 1853 to what is today the current Diocese of Marquette. With population and economic growth, the church demolished its historic log structure in the 1870s. It replaced it with the timber-framed church, begun in 1874 and completed in the 1880s, that is in use today. 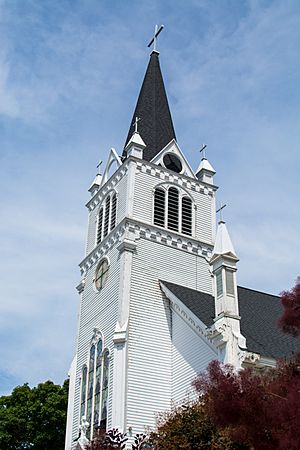 As the 300th anniversary of the church's parish record book approached, Sainte Anne Church was recognized in 1992 as a registered Michigan historic site, designated as SO622. A state historic marker was erected at the church. As measured by the continuity of its parish records, the parish of Sainte Anne de Michilimackinac is one of the oldest Roman Catholic parishes in the interior of North America. A museum is operated in the church's ground floor; it interprets and displays artifacts of the parish's history.

All content from Kiddle encyclopedia articles (including the article images and facts) can be freely used under Attribution-ShareAlike license, unless stated otherwise. Cite this article:
Sainte Anne Church (Mackinac Island) Facts for Kids. Kiddle Encyclopedia.