Mackinaw City is a village in Emmet and Cheboygan counties in the U.S. state of Michigan. The population was 806 at the 2010 census; the population surges during the summer tourist season, including an influx of tourists and seasonal workers who serve in the shops, hotels and other recreational facilities there and in the surrounding region. Mackinaw City is at the northern tip (headland) of the Michigan's Lower Peninsula along the southern shore of the Straits of Mackinac. Across the straits lies the state's Upper Peninsula. These two land masses are physically connected by the Mackinac Bridge, which runs from Mackinaw City north to St. Ignace. Mackinaw City is also the primary base for ferry service to Mackinac Island, located to the northeast in the straits.

According to AAA's 2009 TripTik requests, Mackinaw City is the most popular tourist city in the state of Michigan. Local attractions include Fort Michilimackinac, the Mackinac Bridge, the Mackinaw Crossings shopping mall, Mill Creek, the Old Mackinac Point Light, the Historic Village, the McGulpin Point Light, and the retired US Coast Guard Icebreaker Mackinaw.

The official name of the community is "The Village of Mackinaw City" and as that suggests, it is a village by state law. Mackinaw City is governed by the General Law Village Act, Public Act No. 3, of 1895, as amended. The downtown district and much of the development lie within Mackinaw Township, Cheboygan County, but the larger portion of the village by area is in Wawatam Township, Emmet County, which borders Mackinaw Township to the west.

The predominant historic tribes in this area were three Algonquian peoples, known collectively as the Council of Three Fires: Chippewa (Ojibwe in Canada), Ottawa (Odawa), and Potawatomi at the time of French contact in the 17th century. These peoples had long frequented the surrounding region, which they called Michilimackinac, to fish, hunt, trade, and worship. Mackinac Island in the straits appeared to have the shape of a turtle. The Native Americans here had a creation myth based on the sacred turtle. The Straits of Mackinac was the center of two routes vital to the fur trade: one to Montreal in the east, by way of Lake Nipissing and the Ottawa River valley; and the other to Detroit in the south via Lakes Huron and St. Clair.

The first European to pass the site of Mackinaw City was Jean Nicolet, sent out from Quebec City by Samuel Champlain in 1633 to explore and map the western Great Lakes, and to establish new contacts and trading partnerships with the Indian tribes of the region. His reports resulted in the French government providing funds to send settlers, missionaries, traders, and soldiers to the Great Lakes region. Father Jacques Marquette had established a mission on Mackinac Island in 1671 (which was shortly thereafter moved to St. Ignace on the Michigan peninsula, where it remained active until 1705). The construction of Fort de Baude at St. Ignace in 1681 was an attempt by the authorities of New France to establish a military presence at the Straits, but it closed in 1697.

Mackinaw City's first European settlement came in 1715 when the French built Fort Michilimackinac. They lost it to the British during the Seven Years' War, and the British abandoned the fort in 1783, after the American Revolutionary War resulted in independence of its Thirteen Colonies. The site of the fort in present-day Mackinaw City is a National Historic Landmark and is now preserved as an open-air historical museum. As with the forts at other settlements of the era and region such as Detroit, Michilimackinac was a fairly small post. It housed French civilians inside the fort, and allowed them to garden, hunt, and fish outside the walls. It was a trading post for the fur trade.

At the end of the French and Indian War (1754–1763), the British took possession of the fort, but continued to allow the French civilians to live within the walls, as they had good relations with the Odawa and Ojibwe for the fur trade. As a part of Pontiac's Rebellion, Chippewa and Fox warriors captured the fort on June 2, 1763 in a surprise attack during a game of baggatiway or lacrosse; the British at the fort were taken prisoner and mostly killed.

Europeans, in the form of French and Scots-Irish traders from Detroit and elsewhere, did not return until the following spring, with the understanding that they would trade more fairly with the Native Americans. The British abandoned the vulnerable site on the mainland during the American Revolutionary War; from 1779 to 1781, the troops moved the fort, including its buildings, to Mackinac Island, where they established Fort Mackinac. What the British did not take with them, they burned; that way they could prevent the American rebels from using Michilimackinac as a base.

In 1857, two men by the names of Conkling and Searles platted what would become Mackinaw City. The original plan reserved the northern portion as a park, to preserve the area that was once Fort Michilimackinac and to accommodate a hoped-for lighthouse. This was not built for nearly a generation after the land was set aside.

Old Mackinac Point Lighthouse was built in 1892 in the same northern park that was originally allotted for its construction. This lighthouse would eventually replace McGulpin Point Light, which was built in the 1870s in the far western end of the village limits.

The village became a vital port for train ferries crossing the Straits beginning in the 1890s, and later, for ferries for automobiles. In the 1890s, Mackinaw had one newspaper, the Mackinaw Witness, published weekly by Presbyterian missionary Rev. G. W. Wood, Jr.

When the Mackinac Bridge was completed in 1957, the Old Mackinac Point Lighthouse was decommissioned immediately thereafter. At the same time, a grant was provided to the Mackinac Island State Park Commission, which owned the property at the Bridge's southern terminus, to begin archeological excavations of the Michilimackinac ruins. Ultimately, a reconstruction of the fort to its 1770s appearance would be constructed.

Auto ferries, which had been running since the early 1900s, ended in 1957 after the completion of the Mackinac Bridge.

Through the course of time, the main industry of Mackinaw City became almost strictly tourist-oriented, with other major sources of employment being civic services such as mail, police, firefighting, schooling, and so on. Camping, which began in Michilimackinac State Park in 1907, was halted in 1971 as a Maritime Park was opened in 1972 around the lighthouse. This park was shut down in 1990, but Old Mackinac Point Lighthouse was opened to the public in 2004. Mill Creek State Park, which includes the area believed to be where Mill Creek's sawmill once flourished when Mackinac Island was being settled, is located about five miles (8 km) southeast of the village along U.S. Highway 23 (US 23). 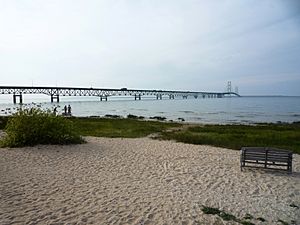 The Mackinac Bridge as viewed from Mackinaw City

The Mackinac or Mackinaw Trail is a historically important route to and from the community, both from the north and the south. The trail was long used by the Native American tribes of Michigan. In 1835 it was surveyed between Saginaw and Mackinac by Lieutenant Benjamin Poole of the 3rd U.S. Artillery. (In Saginaw, Mackinaw Street closely follows Poole's route, which continues in the general direction of present-day Midland. Mackinaw Street twists north, becoming Mackinaw Road and following a section line into Bay County.)

The New York Central's (NYC) Michigan Central subsidiary, the Pennsylvania Railroad's (PRR) Grand Rapids and Indiana Railroad subsidiary, and other rail lines provided passenger traffic on trains such as the Northern Arrow to Mackinaw City. After the NYC and PRR merged to create the Penn Central in 1968, rail traffic diminished and the rail infrastructure deteriorated. The state invested greatly into the failing railways and established the Michigan Northern Railway to operate passenger and freight operations in the early 1980s. Despite sizable patronage, passenger services, as well as freight, operated in the red, prompting the state government to reassess its commitment to operations of the Michigan Northern Railway. All subsidies terminated in 1984, and the lines were sold to CSX Transportation in 1987. It dismantled the tracks shortly thereafter.

The former Michigan Central line to Mackinaw City was improved under the Rails to Trails program. It was rededicated in 2008 as the North Central State Trail, providing a public right-of-way from Mackinaw City to Gaylord, Michigan.

Mackinaw City's central shopping district is located along Central Avenue downtown. Many of the shops sell T-shirts, fudge, and toffee. Also located downtown is a small outdoor shopping mall called Mackinaw Crossings, which features a movie theater. As a tourist city, it has more numerous hotels than many other communities.

There were 413 households of which 18.6% had children under the age of 18 living with them, 39.2% were married couples living together, 7.3% had a female householder with no husband present, 3.4% had a male householder with no wife present, and 50.1% were non-families. 41.9% of all households were made up of individuals and 19.1% had someone living alone who was 65 years of age or older. The average household size was 1.95 and the average family size was 2.62.

There were 404 households out of which 21.5% had children under the age of 18 living with them, 48.5% were married couples living together, 9.4% had a female householder with no husband present, and 39.6% were non-families. 34.4% of all households were made up of individuals and 15.8% had someone living alone who was 65 years of age or older. The average household size was 2.12 and the average family size was 2.67.

All content from Kiddle encyclopedia articles (including the article images and facts) can be freely used under Attribution-ShareAlike license, unless stated otherwise. Cite this article:
Mackinaw City, Michigan Facts for Kids. Kiddle Encyclopedia.