Kids Encyclopedia Facts
Not to be confused with Sheboygan, Wisconsin.

Cheboygan ( shi-BOY-gən) is a city in the U.S. state of Michigan. As of the 2010 census, the city population was 4,876. It is the county seat of Cheboygan County.

The name of the city shares the name of the county and probably has its origin from the Cheboygan River, although the precise meaning is no longer known. It may have come from an Ojibwe word zhaabonigan meaning "sewing needle". Alternatively, the origin may have been "Chabwegan," meaning "a place of ore."

On this 1876 map, Duncan City is shown as a separate city east of Cheboygan in Cheboygan County.
See also: History of Northern Michigan

Cheboygan was originally an Ojibwe settlement. In 1844, Jacob Sammons, a cooper from Fort Mackinac, chose the old native camping ground (then called "Shabwegan") as the site for his cabin. He recruited other settlers, and a post office named "Duncan" was established in 1846. It was made the county seat in 1853.

Duncan or Duncan City was given a post office in 1850 as a result of the building of sawmills in this area. Duncan was made the county seat in 1853 and the location of the federal land office in 1855. The county seat shifted to Cheboygan in about 1870. Later Duncan was included within the expanded boundaries of Cheboygan.

The area became known as Cheboygan in 1870. It was incorporated as a village in 1871. Rail maps in 1876 show planned rail service for Cheboygan, but due to various setbacks, rail did not arrive there until 1881. There was a theater built in town in 1877.

Cheboygan was incorporated as a city (versus a village) in 1889.

In approximately 1890, Cheboygan became the home port for ferryboats to nearby Bois Blanc, an island in the Straits of Mackinac. The Kristen D is a ferry which operates between Cheboygan and Bois Blanc Island. Early in the 20th century, it was home to the pioneering brass era cyclecar maker, Flagler.

In 1944, Cheboygan became the home port of the former U.S. Coast Guard cutter and icebreaker Mackinaw, serving from 1944-2006. Beginning in 2006, the port continued this role as the home dock of the new Mackinaw, a successor cutter.

The climate is described as Humid Continental by the Köppen Climate System, abbreviated as Dfb 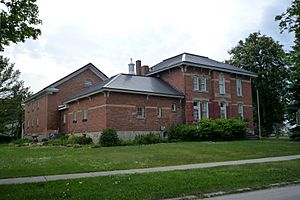 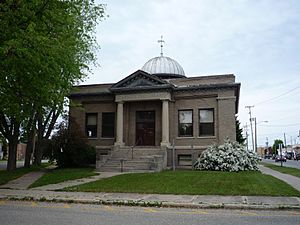 Carnegie Free Library building; the first building constructed in Cheboygan to serve specifically as a library. Steel magnate Andrew Carnegie donated $15,000 for the building in 1908. It was completed in 1913, and served as the city library until 1966. 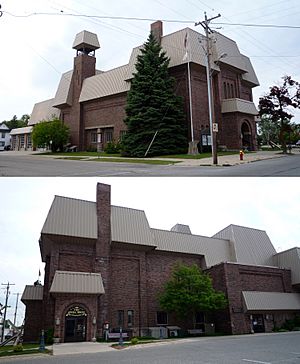 Opposite views of the Opera House, which now also houses the City Hall, police headquarters and fire station.

All content from Kiddle encyclopedia articles (including the article images and facts) can be freely used under Attribution-ShareAlike license, unless stated otherwise. Cite this article:
Cheboygan, Michigan Facts for Kids. Kiddle Encyclopedia.