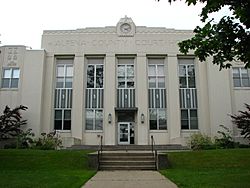 Alpena is a city in the U.S. state of Michigan and the county seat of Alpena County. It is considered to be part of northern Michigan. The Thunder Bay National Marine Sanctuary is located in the city. The population was 10,483 at the 2010 census. The population swells with a large number of visitors in the summer.

Despite its small population, it is by far the largest city in the sparsely populated Northeast Michigan (lower peninsula) area, serving as its commercial and cultural hub. It is considered to be one of the two anchor cities of Northern Michigan, along with Traverse City. MidMichigan Health is a federally designated rural regional medical referral center, and is the largest employer in the city.

It was originally part of Anomickee County founded in 1840, which in 1843 was changed to Alpena, a pseudo-Native American word — a neologism coined by Henry Schoolcraft, meaning something like "a good partridge country." This was part of a much larger effort to rename a great many of the Michigan counties at the time.

The region, known as the "Sunrise Side" from its location on the east shoreline of Michigan, was first a site of commercial fishing activity and is still home to extensive commercial fishing activities. Later the region, like much of Michigan, was shaped by the logging era of the 1800s. Today, Alpena is known for its limestone quarry, one of the largest in the world, owned and operated by the Lafarge corporation and is a major cement manufacturer and exporter. While at one time the largest in the world, the cement plant is now just the largest cement plant for Lafarge in North America with an annual capacity of almost 3 million tons of cement. Alpena is also the world headquarters of Besser Company, a manufacturer of concrete block machines. Tourism (fishing, hunting, camping and a variety of water sports) is also important to Alpena's economy.

Most of the city was lost in the Great Michigan Fire of 1871. Less than one year later, on July 12, 1872, Alpena was hit by another fire, the largest in its history, which destroyed 15 acres of homes and businesses for a total amount of 65 buildings. The blaze started in a barn and lasted for two hours, killing at least four people and causing at least $180,000 in damages. Alpena was again hit by a disastrous fire on July 11, 1888.

In February 2007 Bizjournals ranked Alpena as the hottest retirement destination in the Great Lakes area and #44 nationally.

The city has a number of notable buildings, including the Art deco Alpena County Courthouse, the I.O.O.F. Centennial Building, and Temple Beth El, one of the oldest synagogues in the United States.

Alpena is situated along the Lake State Railway, formerly the Detroit and Mackinac Railway (D&M). Earlier railroads that served Alpena were built and owned by the Alger Smith and Co. logging company: (1) the Detroit, Bay City and Alpena Railroad, which entered Alpena from the south around 1886, and (2) the Alpena and Northern Railroad.

There were 4,734 households of which 24.8% had children under the age of 18 living with them, 38.3% were married couples living together, 12.2% had a female householder with no husband present, 3.6% had a male householder with no wife present, and 45.8% were non-families. 39.4% of all households were made up of individuals and 17.2% had someone living alone who was 65 years of age or older. The average household size was 2.13 and the average family size was 2.84.

There were 4,874 households out of which 26.9% had children under the age of 18 living with them, 44.1% were married couples living together, 11.5% had a female householder with no husband present, and 41.2% were non-families. 35.9% of all households were made up of individuals and 17.9% had someone living alone who was 65 years of age or older. The average household size was 2.24 and the average family size was 2.93.

There are seven recognized historical markers in the city: 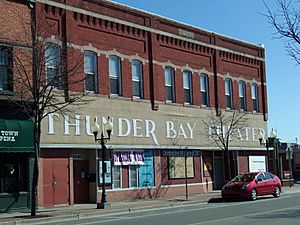 All content from Kiddle encyclopedia articles (including the article images and facts) can be freely used under Attribution-ShareAlike license, unless stated otherwise. Cite this article:
Alpena, Michigan Facts for Kids. Kiddle Encyclopedia.