Kids Encyclopedia Facts
This page is about the unincorporated community. For the county, see Oscoda County, Michigan. For the township, see Oscoda Township, Michigan.

Oscoda is an unincorporated community in the U.S. state of Michigan located on the northern side of the Au Sable River where it enters Lake Huron. The community of Au Sable is on the other side of the river. Oscoda is in Oscoda Township in Iosco County, and not in Oscoda County, which is to the northwest. Oscoda was incorporated as a village in 1885, but disincorporated in 1919 after forest fires devastated the area. The 1990 census population was 1,061, although 3,000 personnel were stationed at nearby Wurtsmith Air Force Base. Oscoda is a census-designated place (CDP) for statistical purposes. As of the 2000 census (several years after the closure of the air force base), the population was 992, and in 2010 the population was 903. The post office at Oscoda first opened with the name AuSable on September 23, 1856. The name changed to Oscoda on July 1, 1875.

Nearby is the Lumberman's Monument, in honor of the lumberjacks that first populated the area. The state of Michigan has designated Oscoda as the official home of Paul Bunyan due to the earliest documented publications in the Oscoda Press, August 10, 1906, by James MacGillivray (later revised and published in The Detroit News in 1910).

Wurtsmith Air Force Base (originally Camp Skeel) was located just northwest of the community from 1923 to 1993. Wurtsmith was the site of the Strategic Air Command's 379th Bombardment Wing, consisting of one nuclear-armed B-52 bomber squadron and one air refueling squadron equipped with KC-135s. It also housed the Aerospace Defense Command's 75th and later 94th (Hat In The Ring) fighter interceptor squadrons. The 75th FIS flew the F-101, white the 94th flew the F-106. The Charter Township of Oscoda created a redevelopment authority with the cooperation of the Michigan Legislature. The Wurtsmith Renaissance Zone was created in 1997, which exempted businesses and residents of the 5,000 acres (20 km2) zone from all state and most local taxes.

The Oscoda–Wurtsmith Airport is now a public airport. It occupies a portion of the base and is primarily used for cargo and light general aviation activities. Other tenants include the Aune Medical Center, Alcona Health Center Dental Clinic, Alpena Community College, Yankee Air Force Museum - Wurtsmith Division, and numerous private businesses. Some of the former military housing units have been refurbished and now serve as a major population base in the Oscoda area.

Oscoda is notable for being featured in the 2002 documentary film Bowling for Columbine, in a scene where Michael Moore interviews two young residents in a local pool and billiard parlor. Eric Harris, one of the shooters in the Columbine High School Massacre, spent some of his early years in Oscoda while his father was serving in the U.S. Air Force.

Oscoda is considered to be part of Northern Michigan and is near the Huron National Forest, which offers outdoor recreational opportunities such as hunting, swimming, cross-country skiing, boating and fishing. The forest contains 330 miles of hiking trails. 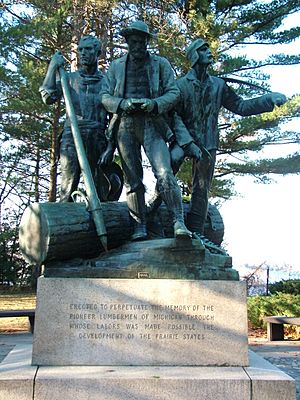 The Lumberman's Monument, dedicated to the workers of the early logging industry, is located within the Huron-Manistee National Forests near Oscoda.

There were 460 households, out of which 24.3% had children under the age of 18 living with them, 45.9% were married couples living together, 7.8% had a female householder with no husband present, and 43.3% were non-families. 38.9% of all households were made up of individuals, and 17.8% had someone living alone who was 65 years of age or older. The average household size was 2.14 and the average family size was 2.80.

This climatic region is typified by large seasonal temperature differences, with warm to hot (and often humid) summers and cold (sometimes severely cold) winters. According to the Köppen Climate Classification system, Oscoda has a humid continental climate, abbreviated "Dfb" on climate maps.

All content from Kiddle encyclopedia articles (including the article images and facts) can be freely used under Attribution-ShareAlike license, unless stated otherwise. Cite this article:
Oscoda, Michigan Facts for Kids. Kiddle Encyclopedia.