Tawas City is a city along Lake Huron in the Lower Peninsula of the U.S. state of Michigan. The population was 1,827 at the 2010 census. It is the county seat of Iosco County. The city is adjacent to Tawas Township but is administratively autonomous.

Since Tawas City’s founding, the community’s economy has been a major factor influencing land use and development patterns in the city. The rich natural resource base of the area (forest lands, Lake Huron and wildlife) combined with the protection offered by Tawas Bay provided the basis for the original founding of the city and caused the lumber industry to flourish. Tawas Bay continues to serve as a harbor of refuge that large freighters use to escape the adverse effects of storms on Lake Huron. The shoreline, as the transition zone between land and water, became the focus of the community, with the city developing in a linear fashion along the bayshore.

Statements made that “Tawas” is derived from the word “Ottawas” and that the Ottawa Indians once inhabited this region are false. The Indians, who in early days camped along the shore of Tawas Bay and near the mouth of Tawas River, were a tribe from the Saginaw band of Chippewas. Their leader was Chief O-ta-was. What we know as Tawas Bay was in reality O-ta-was’ Bay, for on its shore the old chief had his camp. Early map makers dropped in an extra “t,” as can be easily verified; later map makers dropped off the “s,” for the name of the point of land that divided the bay from Lake Huron was known as Ottawa Point until comparatively recent spelling and pronunciation for the name of our earliest residents, have given us the name Tawas.

The Whittemores gave the name Tawas City to the town they founded in 1854. Eight years later, when the lumbering firm of Smith, Van Valkenburg and Company built a mill on the bay shore a mile or so east of the Whittemore mill and holding, and a community sprang up around this latter mill, the cluster of homes was, by common consent, named East Tawas. For many years, residents of both towns and the farming community surrounding them often referred to Tawas City as “old town” and to East Tawas as “east town.”

There were 723 households, of which 23.8% had children under the age of 18 living with them, 45.1% were married couples living together, 11.9% had a female householder with no husband present, 4.0% had a male householder with no wife present, and 39.0% were non-families. 34.4% of all households were made up of individuals, and 14.9% had someone living alone who was 65 years of age or older. The average household size was 2.22 and the average family size was 2.79. 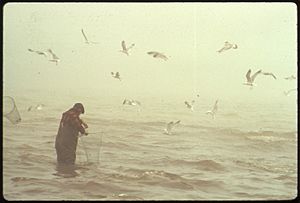 The City is on Tawas Bay, and Tawas Point State Park is located in nearby Baldwin Township. Both are considered to be an especially good locale for birding. and are listed as Important bird areas. It is said to be the most important "migrant trap" in the Saginaw Bay area. A fairly complete list of migratory birds that frequent the area is available. In more recent years Tawas Point has been a top kite-boarding destination.

All content from Kiddle encyclopedia articles (including the article images and facts) can be freely used under Attribution-ShareAlike license, unless stated otherwise. Cite this article:
Tawas City, Michigan Facts for Kids. Kiddle Encyclopedia.