Rogers City is a city in the U.S. state of Michigan. The population was 2,827 at the 2010 census. It is the county seat of Presque Isle County. The city is adjacent to Rogers Township, but is politically independent.

Rogers City is located on Lake Huron and is home to two salmon fishing tournaments. The world's largest open-pit limestone quarry, the Port of Calcite, is located within the city limits and is one of the largest shipping ports on the Great Lakes.

The freighter, SS Carl D. Bradley, home port at Rogers City, sank in Lake Michigan on November 18, 1958. There were two survivors while 33 lost their lives. 26 of the 33 deceased were from Rogers City, with the others from nearby towns. Fiftieth anniversary memorial activities took place in 2008. 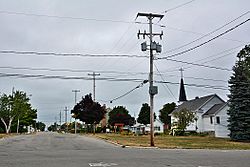 There were 1,328 households, of which 20.4% had children under the age of 18 living with them, 47.8% were married couples living together, 8.6% had a female householder with no husband present, 3.8% had a male householder with no wife present, and 39.8% were non-families. 36.2% of all households were made up of individuals, and 18% had someone living alone who was 65 years of age or older. The average household size was 2.03 and the average family size was 2.60. 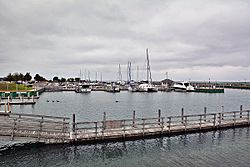 All content from Kiddle encyclopedia articles (including the article images and facts) can be freely used under Attribution-ShareAlike license, unless stated otherwise. Cite this article:
Rogers City, Michigan Facts for Kids. Kiddle Encyclopedia.