Because of its recognizable shape, the Lower Peninsula is nicknamed "the mitten", with the eastern region identified as "The Thumb". This has led to several folkloric creation myths for the area, one being that it is a hand print of Paul Bunyan, a giant lumberjack and popular European-American folk character in Michigan. When asked where they live, Lower Peninsula residents may hold up their right palm and point to a spot on it to indicate the location. The peninsula is sometimes divided into the Northern Lower Peninsula—which is more sparsely populated and largely forested—and the Southern Lower Peninsula—which is largely urban or farmland.

The Lower Peninsula dominates Michigan politics, and maps of it without the Upper Peninsula are sometimes presented as "Michigan", which contribute to resentment by "Yoopers" (residents of "the U.P"). Yoopers jokingly refer to residents of the Lower Peninsula as "flat-landers" (referring to the region's less rugged terrain) or "trolls" (because, living south of the Mackinac Bridge, they "live under the bridge").

The Lower Peninsula is bounded on the south by the states of Indiana and Ohio. It is bounded by the west by Lake Michigan and on the northeast by Lake Huron, which connect at the Straits of Mackinac. In the southeast, the waterway of the St. Clair River, Lake St. Clair, Detroit River, and Lake Erie separate it from the province of Ontario, Canada.

At its widest points, the Lower Peninsula is 277 miles (446 km) long from north to south and 195 miles (314 km) from east to west. It contains nearly two-thirds of Michigan's total land area. The surface of the peninsula is generally level, broken by conical hills and glacial moraines usually not more than a few hundred feet tall. The western coast features extensive sandy beaches and dunes. It is divided by a low water divide running north and south. The larger portion of the state is on the west of this and gradually slopes toward Lake Michigan. The highest point in the Lower Peninsula is not definitely established but is either Briar Hill at 1,705 feet (520 m), or one of several points nearby in the vicinity of Cadillac. The lowest point is the surface of Lake Erie at 571 feet (174 m). 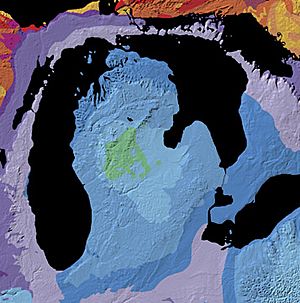 Geologic map of the Michigan Basin

The Lower Peninsula is dominated by a geological basin known as the Michigan Basin. That feature is represented by a nearly circular pattern of geologic sedimentary strata in the area with a nearly uniform structural dip toward the center of the peninsula. The basin is centered in Gladwin County where the Precambrian basement rocks are 16,000 feet (4,900 m) deep. Around the margins, such as under Mackinaw City, Michigan, the Precambrian surface is around 4,000 feet (1,200 m) down. This 4,000-foot (1,200 m) contour on the bedrock clips the northern part of the lower peninsula and continues under Lake Michigan along the west. It crosses the southern counties of Michigan and continues on to the north beneath Lake Huron. 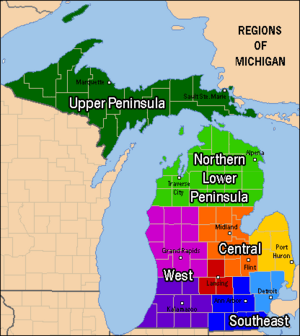 Michigan regions, including the Upper Peninsula and the four principal regions of the Lower Peninsula.

Michigan's Lower Peninsula can be divided into four main regions based on geological, soil, and vegetation differences; amount of urban areas or rural areas; minority populations; and agriculture. The four principal regions listed below can further be separated into sub-regions and overlapping areas.

All content from Kiddle encyclopedia articles (including the article images and facts) can be freely used under Attribution-ShareAlike license, unless stated otherwise. Cite this article:
Lower Peninsula of Michigan Facts for Kids. Kiddle Encyclopedia.