Kids Encyclopedia Facts
This page is about the river in Michigan. For other uses, see Grand River (disambiguation).

The Grand River is a river in the southwestern portion of the southern peninsula of Michigan, United States, that flows into Lake Michigan's southeastern shore. It is the longest river in Michigan, running 252 miles (406 km) from its headwaters in Hillsdale County on the southern border north to Lansing and west to its mouth on the Lake at Grand Haven. Native Americans who lived along the river before the arrival of the French and British called the river O-wash-ta-nong, meaning "Far-away-water'", because of its length.

The so-named Grand Rapids, in what is today the namesake city, were a mile-long, 300-yard-wide and 10-to-15-foot-tall rapids for which the river was famous. These were submerged following the construction of numerous dams, starting in 1835, and flooding of areas behind the dams. The river has not had any rapids for nearly a century. 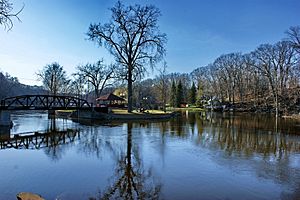 Island Park on the Grand River at Grand Ledge

The headwaters of the Grand River begin from natural springs in Somerset Township in Hillsdale County near the boundary with Liberty Township in Jackson County, and flows through Jackson, Ingham, Eaton, Clinton, Ionia, Kent, and Ottawa counties before emptying into Lake Michigan. The river runs through the cities of Jackson, Eaton Rapids, Lansing, Grand Ledge, Portland, Ionia, Lowell, Grand Rapids, and Grand Haven.

The Grand River is one of three major tributaries of Lake Michigan, including the Fox River (Green Bay tributary) on the western shore, and Kalamazoo River on the southeastern shore. It falls in elevation from 1260 ft. in the highlands of its headwaters to 577 ft. at its mouth on Lake Michigan. Its waters drain northward through the lake, then south and east through the Great Lakes waterways into the St. Lawrence River, which flows northeasterly into the Gulf of St. Lawrence on the Atlantic Ocean. The Grand River discharges an average 3,800 ft³/s (107.5 m³/s).

Its watershed is the second-largest in the state, draining an area of 5,572 square miles (14,430 km2), including 18 counties and 158 townships. Much of the basin is flat, and it contains many swamps and lakes. The basin is composed of four sub-basins: Upper Grand, Lower Grand, Thornapple, and Maple, where the four major tributaries flow: the Flat, Rogue, Thornapple, and Maple rivers.

There are fourteen dams on the main branch of the Grand River. Some 218 dams were built on its tributaries; these have divided the ecosystem into a set of dysfunctional local streams. 228 of these dams are registered with the Michigan Department of Environmental Quality.

The main branch dams are:

It is estimated that 22% of the pesticide usage in the Lake Michigan watershed occurs in the Grand River drainage, which accounts for only 13% of the lake's total watershed. The river is a trout and salmon stream for much of its length.

As the glacial ice receded from what is the central Lower Peninsula of Michigan around 11,000 years ago, the Maple River and lower Grand River served as a drainage channel for the meltwater. The channel ran east to west, emptying into proglacial Lake Chicago, the ancestor of Lake Michigan.

About 2,000 years ago, the Hopewell Indians settled along the Grand River near present-day Grandville. Their presence is still seen in the preserved burial mounds. By the late 17th century, the Ottawa had set up villages on the west bank of the Grand River at the site of what would later become Grand Rapids. For these peoples, as well as for later explorers, fur traders and settlers, river served as an important navigational trade route.

It formed part of a major demarcation of land ceded by Native Americans enabling U.S. settlers to legally obtain title to land in the area. In the 1821 Treaty of Chicago, the Ottawa, Ojibwe, and Potawatomi ceded to the United States all lands in Michigan Territory south of the Grand River, with the exception of several small reservations.

The Grand was important to the rapid development of West-Central Michigan during the 1850s to 1880s, as logs from Michigan's rich pine and oak forests floated down the Grand River for milling. After the Civil War, many soldiers found jobs as lumberjacks cutting logs and guiding them down the river with pike poles, peaveys, and cant hooks. The men wore bright red flannel, felt clothes, and spiked boots to hold them onto the floating logs; these boots chewed up the wooden sidewalks and flooring of the local bars, leading one hotel owner to supply carpet slippers to all river drivers who entered his hotel. The "jacks" earned $1 to $3 per day and all the "vittles" they could eat, which was usually a considerable amount.

Grand River Avenue (or Grand River Road) was built early in the settlement of Michigan and ran from the head of navigation on the Grand to downtown Detroit. It formed an important part of an early route between Chicago and Detroit, along with the Grand itself, from Grand Rapids to Grand Haven on Lake Michigan.

Restoration of the rapids

The city of Grand Rapids was built starting in 1826 on the site of a mile long rapids 40 miles upstream from the river's mouth, although these disappeared after the installation of a run-of-river dam in 1866 and five low-rise dams during a river beautification project in 1927. A fish ladder installed in 1974, nearly replaces the West Side Water Power Canal headgates removed in 1959/60. In recent years, Grand Rapids Whitewater, a private nonprofit organization, is working toward restoring the rapids to the river in Grand Rapids. The project, slated to begin in 2019, will remove five dams between Sixth street and Pearl street to restore an 18-foot drop in the Grand River's elevation.

Two of Grand Valley State University's campuses are located on the banks of the Grand River. The main campus in Allendale and the Pew Grand Rapids campus in Grand Rapids both border the river in separate locations miles from each other. The Grand is home to GVSU's rowing team, and the crew boathouse sits parallel to the river on the Allendale campus's north side.

At least 80 bridges cross the river's 250-mile span, with most bridge structures clustered in metropolitan/municipal areas along the river. County road and state highway crossings can be found in less densely populated areas along the waterway:

All content from Kiddle encyclopedia articles (including the article images and facts) can be freely used under Attribution-ShareAlike license, unless stated otherwise. Cite this article:
Grand River (Michigan) Facts for Kids. Kiddle Encyclopedia.