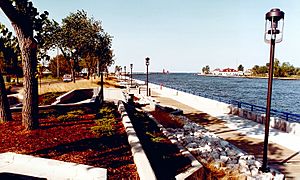 The entrance to the harbor at Grand Haven, Michigan.

The Potawatomi and Ottawa Indians lived in the area for centuries and used the river as a trade route into the interior of Michigan. Some of the long culture of the Ottawa tribe is being revealed through the excavation of archeological artifacts.

After the War of 1812, this area became more settled by Americans. The first permanent resident was a Presbyterian minister, William Montague Ferry, who founded in 1834 the first area church and neighboring town of Ferrysburg. Residents named the town as "Grand Haven" in 1835. Sheldon Tannery was founded in 1838, developing to process leathers from the fur trade and cattle. The second church was organized in 1850. Ferry founded the city's first bank in 1851 in the Ferry & Son building on Harbor Drive. He also started a school, Ferry Elementary, which continues to operate. The city was incorporated in 1867.

In the mid-to-late 19th century, Grand Haven developed as a logging, lumber mill and shipping town, as well as a shipbuilding center.

The city was served by the Grand Trunk Railway, which ran along the waterfront near the river. Its depot and offices have been adapted for use as a historical museum. The Story and Clark Piano Company built pianos in the city from 1900-1984. The smokestack at the piano factory collapsed during the Southern Great Lakes Derecho of 1998. In August 2006, Eagle-Ottawa Leather Co., which developed from the 1838 Sheldon Tannery, announced it would close its local operations that year.

Given the importance of shipping and water trade to the city, the Grand Haven Lighthouses were built in 1839 on the south pier, to mark the most navigable channel into the river. The current lighthouses, painted red, were built in 1875 (outer light) and 1905 (inner). They are connected by a lighted catwalk, which runs along the pier to the shore. 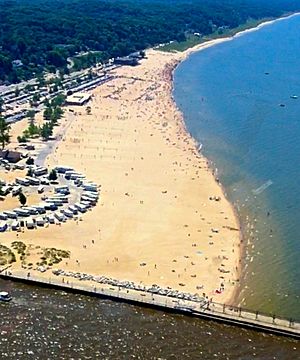 The Grand Haven port community is an active beach resort with boating, fishing, sailing, biking, skating etc. along with connecting campgrounds and recreational areas. The city has over 100 miles (160 km) of bike trails, a state beach, boardwalk, two lighthouses, a pier, wharf, large charter fishing fleet and a Great Lakes port, where it imports limestone, slag, cement and coal while exporting sand. Grand Haven is a destination point for residents of inland cities of West Michigan, as well as many from the other side of the state. Grand Rapidians regularly visit to take advantage of the close proximity to the Lake Michigan beaches, State campgrounds, restaurants, bars, attractions with many even owning cottages in the area as their home away from home.

Grand Haven State Park was nationally recognized for having one of the top five beaches in the United States, by Good Morning America - Travel Mom. In summer, water temperatures do reach the low 70s°F (2013 had 19 days in the 70s), bringing tens of thousands of visitors as a boon to the local economy.

The state park also includes a campground on Lake Michigan, near the pier and lighthouses. In addition, the city features a ski park (Mulligan's Hollow Ski Bowl) and a skate park. The waterfront locations bring tourists from all over the state and region for activities which include, boating, sailing, jet skiing, tubing, wind surfing, and an annual kite festival.

Grand Haven is home to the United States Coast Guard's "Sector Field Office Grand Haven." The first Coast Guard presence in the city was in 1924. The Coast Guard cutter Escanaba was based in the city until the Second World War. After it was sunk by a U-boat of Nazi Germany's Kriegsmarine, the citizens of Grand Haven raised more than $1,000,000 in bonds to build a replacement cutter bearing the same name; several pieces of wreckage remain displayed on the city's waterfront.[1] Grand Haven hosts the annual Coast Guard Festival, a celebration based on Coast Guard Day, which draws U.S. and Canadian vessels along with parades of bands and other activities, including a memorial to the 101 sailors lost in the Escanaba sinking. The yearly attendance for this event exceeds 300,000 people over the two-week period of the festival. Grand Haven is the only city officially designated as Coast Guard City, USA by an act of Congress signed by President Bill Clinton. The act was Public Law 105-383 enacted by the United States Congress and signed by the president on November 13, 1998.

The Grand Haven Musical Fountain was built on the opposite bank of the Grand River from the city center in 1969. It plays nightly during the tourist season. When it was built, it was the world's largest such fountain. Today, the overall largest fountain is in Las Vegas.

Grand Haven, Michigan: Grand River to the right and Lake Michigan up front.

Grand Haven has been one of many technology leaders in West Michigan and throughout the country, having been featured in the national media, including on ABC, in PCWorld, ComputerWorld and Forbes magazine. The city was the first municipality in the country to feature a citywide wireless internet service. The wireless service is designed to work throughout the city and up to 15 miles (24 km) offshore for boaters. In 2004, the city started offering wireless internet service for residents, businesses and visitors for payment on varying cost-time scales.

The Grand River waterfront as seen from Dewey Hill

There were 4,769 households of which 24.8% had children under the age of 18 living with them, 42.1% were married couples living together, 11.0% had a female householder with no husband present, 3.9% had a male householder with no wife present, and 42.9% were non-families. 37.2% of all households were made up of individuals and 14.9% had someone living alone who was 65 years of age or older. The average household size was 2.15 and the average family size was 2.82.

There were 4,979 households out of which had children under the age of 18 living with them, 45.5% were married couples living together, 9.7% had a female householder with no husband present, and 41.9% were non-families. 34.8% of all households were made up of individuals and 14.2% had someone living alone who was 65 years of age or older. The average household size was 2.17 and the average family size was 2.81.

All content from Kiddle encyclopedia articles (including the article images and facts) can be freely used under Attribution-ShareAlike license, unless stated otherwise. Cite this article:
Grand Haven, Michigan Facts for Kids. Kiddle Encyclopedia.