Jackson is a city located along Interstate 94 in the south central area of the U.S. state of Michigan, about 40 miles (64 km) west of Ann Arbor and 35 miles (56 km) south of Lansing. It is the county seat of Jackson County. As of the 2010 census, the city population was 33,534. It is the principal city of the Jackson Metropolitan Statistical Area, which includes Jackson County and has a population of 160,248.

It was founded in 1829 and named after President Andrew Jackson. 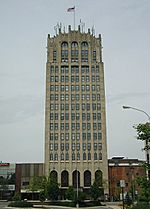 On July 3, 1829, Horace Blackman, accompanied by Alexander Laverty, a land surveyor, and an Indian guide forded the Grand River and made camp for the night at what is now Trail and N. Jackson Street. They arrived in Jackson on a well-traveled Indian trail leading west from Ann Arbor. Blackman hired Laverty and Pewytum to guide him west. Blackman returned to Ann Arbor and then Monroe and registered his claim for 160 acres (65 ha) at two dollars an acre. Blackman returned to Jackson in August 1829, with his brother Russell. Together they cleared land and built a cabin on the corner of what would become Ingham and Trail streets. The town was first called Jacksonopolis. Later, it was renamed Jacksonburgh. Finally, in 1838 the town's name was changed to simply Jackson.

Birthplace of the Republican Party – "Under the Oaks"

Jackson is one of the birthplaces of the Republican Party. Undisputed is the fact that the first official meeting of the group that called itself "Republican" was held in Jackson Under the Oaks on July 6, 1854. A Michigan historical marker at what is now the northwest corner of Second and Franklin streets in Jackson commemorates an anti-slavery county convention on July 6, 1854. Meeting outside to avoid a hot, over-crowded hall, the group ultimately selected a slate of candidates for state elections. The marker identifies this as the birth of the Republican Party. The site, an oak grove on "Morgan's Forty", then on the outskirts of town, became known as "Under the Oaks".

Jackson was an early home to the moped parts industry. Even before Detroit began building cars on assembly lines in 1910, Jackson was busy making parts for cars and putting them together. By 1910, the auto industry became Jackson's main industry. Over twenty different cars were once made in Jackson, including: Reeves, Jaxon, Jackson, CarterCar, Orlo, Whiting, Butcher and Gage, Buick, Janney, Globe, Steel Swallow, C.V.I., Imperial, Ames-Dean, Cutting, Standard Electric, Duck, Briscoe, Argo, Hollier, Hackett, Marion-Handly, Gem, Earl, Wolverine, and Kaiser-Darrin. The Ye Ole Carriage Shop in Spring Arbor displays over 60 antique and classic cars including 5 one-and-onlys and 16 made in Jackson including a 1902 JAXON. Today the auto parts industry remains one of the largest employers of skilled machine operators in Jackson County.

Michigan's first state prison was approved by the legislature in 1838. A temporary wooden prison, enclosed by a fence of tamarack poles, was built on sixty acres donated for that purpose inside the city limits of Jackson. In 1839 the first thirty-five prisoners were received. A permanent prison was built three years later. Beginning in the 1850s under Warden H.F. Hatch a greater emphasis was placed on the education and rehabilitation of prisoners. By 1882, Michigan’s First State Prison (1838–1934) was the largest walled prison in the world. Within its walls, the factories and surrounding farms, manned by cheap inmate labor, turned Jackson into one of the leading industrial cities in the nation. After 1934 the inmates were housed in the new prison just north of Jackson's city limit in Blackman Township. The historic building is now used as an artists’ resident community, known as the Armory Arts Village. Tours of the original prison site on Cooper St. inside the city limits are available through the Original Jackson Historic Prison Tours. A closed fully intact cell block on the site of the modern functioning prison in Blackman Township is now open as the Cell Block 7 Prison Museum. Independently operated by the accredited Ella Sharp Museum, this is the only museum that you can visit a closed cell block on the grounds of an active prison for a self-guided tour.

Jackson’s numerous railroad connections and the local invention of the duplex corset by Bortree helped make Jackson a hotbed of corset manufacturing. By the early 20th century, Jackson was home to as many as 16 manufacturers of women’s corsets, the majority of which were located on Cortland and Pearl streets. As elastics came into manufacturing and fashions changed, the corset industry quickly declined. The majority of the corset manufacturers in Jackson closed their doors by 1920. Only three of the original corset companies survived past the 1920s, surviving by changing to the production of therapeutic and prosthetic support garments and devices.

“The First” Moses Bortree founded the Bortree Corset Company, the first corset manufacturer outside of New York, in 1868 at 112 W. Cortland. Founded to make crinoline skirts and bustles (hoop skirts!), they began manufacturing Bortree’s newest creation, the Duplex Corset in 1875. Within five years, production rose from 50,000 to 300,000 corsets per year.

“The Biggest” Founded in 1884, the Jackson Corset Co. became the largest manufacturer of corset and waist garments in the US. Located at 209-215 W. Cortland St., they employed almost 300 people by 1895. Inside Right:

“Woman-Owned” The Coronet Corset Manufactory opened in 1880 at 146 W. Main St. and later moved to 131-133 W. Pearl St. Coronet had the distinction of being run by the first and only female president, Mrs. C.A. McGee, who invented and patented the Coronet Corset.

There were 13,294 households of which 35.8% had children under the age of 18 living with them, 30.7% were married couples living together, 22.4% had a female householder with no husband present, 6.1% had a male householder with no wife present, and 40.8% were non-families. 33.9% of all households were made up of individuals and 9.7% had someone living alone who was 65 years of age or older. The average household size was 2.46 and the average family size was 3.14.

Jackson was a major railway hub from the late nineteenth century into the mid-twentieth century, and for over a century has been known as the crossroads of Michigan. Today the Michigan Central Railroad Jackson Depot is the nation's oldest train station in continuous active use, located on East Michigan Avenue. It was placed on the national register of historic places in 2002.

Reynolds Field at Jackson County Airport is the main airport for the city. It hosted commercial service, primarily under the North Central Airlines banner, until 1984. With the "Blue Goose" aircraft now gone, the airport today operates as a general aviation facility. The Jackson Blues Festival is held there annually in June. The 700-acre airport, equipped with an ILS system, is located just south of I-94 ( Airport Road exit #137) and is home to over 100 general aviation aircraft ranging from single engine planes to business/corporate jet aircraft. The Airport is home to many businesses including the Jackson College Flight School, a restaurant, bar, and car rental.

Amtrak, the national passenger rail system, provides service to Jackson, operating its Wolverine three times daily in each direction between Chicago and Pontiac, Michigan, via Detroit. Baggage cannot be checked at this location; however, up to two suitcases in addition to any "personal items" such as briefcases, purses, laptop bags, and infant equipment are allowed on board as carry-ons. Jackson and Lansing Railroad (JAIL) owns a line from Jackson to Lansing. Norfolk Southern (NS) owns a yard in Jackson as well.

The City of Jackson Parks and Recreation Department includes:

Some of the parks include:

This climatic region is typified by large seasonal temperature differences, with warm to hot (and often humid) summers and cold (sometimes severely cold) winters. According to the Köppen Climate Classification system, Jackson has a humid continental climate, abbreviated "Dfb" on climate maps.

All content from Kiddle encyclopedia articles (including the article images and facts) can be freely used under Attribution-ShareAlike license, unless stated otherwise. Cite this article:
Jackson, Michigan Facts for Kids. Kiddle Encyclopedia.