Kids Encyclopedia Facts
This page is about the city. For the adjacent town, see Ripon (town), Wisconsin. 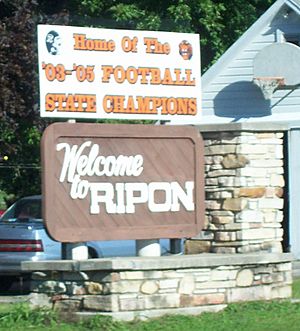 Ripon [ɹɪpɘn] is a city in Fond du Lac County, Wisconsin, United States. The population was 7,733 at the 2010 census. The city is surrounded by the Town of Ripon.

Ripon, named for the English cathedral city of Ripon, North Yorkshire, by John S. Horner due to the fact that this is where his ancestors came from when they originally emigrated to America. Horner named not only the town but also most of the streets, his house is still standing today. Ripon was officially founded as a city in 1849 by David P. Mapes, a former New York steamboat captain. Within two years the city had absorbed the nearby commune of Ceresco, established in 1844 by the Wisconsin Phalanx, a group of settlers inspired by the communitarian socialist philosophy of Charles Fourier. Mapes was a founder of Ripon College, originally incorporated as Brockway College in 1851.

Birthplace of the Republican Party 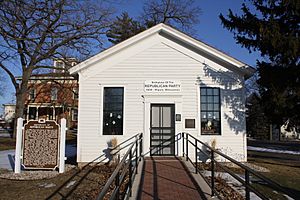 The Little White Schoolhouse of Ripon, listed on the List of Registered Historic Places

Meeting at a school house in Ripon on February 28, 1854, some 30 opponents of the Kansas-Nebraska Act called for the organization of a new political party (to link their cause with the Declaration of Independence). The group also took a leading role in the creation of the Republican Party in many northern states during the summer of 1854. While conservatives and many moderates were content merely to call for the restoration of the Missouri Compromise or a prohibition of slavery extension, the group insisted that no further political compromise with slavery was possible.

The February 1854 meeting was the first political meeting of the group that would become the Republican Party. The modern Ripon Society, a Republican think tank, takes its name from Ripon, Wisconsin.

Ripon is located in the northwest corner of Fond du Lac County.

Ripon lies in the Sinnipee Group, a geologic formation composed primarily of dolostone, with limestone as a secondary rock type. Ripon's bedrock is primarily limestone. The limestone indicates that Ripon's location was once a shallow sea. Since Ripon is on the Sinnipee Group, it is a Karst environment. Ripon also lies in an area that was affected by several glaciation periods. The area has relatively gentle relief and is part of the Fox River (Wisconsin) watershed.

There were 3,053 households of which 27.8% had children under the age of 18 living with them, 45.3% were married couples living together, 8.7% had a female householder with no husband present, 3.9% had a male householder with no wife present, and 42.1% were non-families. 36.5% of all households were made up of individuals and 17.7% had someone living alone who was 65 years of age or older. The average household size was 2.22 and the average family size was 2.90.

Mount Zion Lutheran Church is a church of the Wisconsin Evangelical Lutheran Synod in the south of Ripon.

All content from Kiddle encyclopedia articles (including the article images and facts) can be freely used under Attribution-ShareAlike license, unless stated otherwise. Cite this article:
Ripon, Wisconsin Facts for Kids. Kiddle Encyclopedia.