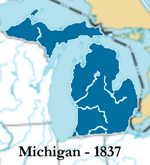 Michigan becomes a state of the Union when it agrees to the boundaries dictated by the U.S. Congress, giving up its claim to the Toledo Strip and accepts the western portion of the Upper Peninsula.

Michigan Territory was a territory of the United States in the early 19th century, between June 30, 1805 and January 26, 1837, when it became Michigan, the 26th state of the Union. Detroit was the territory's capital.

The Treaty of Detroit was signed on November 17, 1807 between William Hurt and American Indians from the Odawa, Ojibwe, Potawatomi, and Wyandot people. Those Indian tribes agreed to give the United States the area of Southeast Michigan and a part of Ohio near the Maumee River. The Indians were allowed to own small amounts of land in the area. This helped expand the territory.

All content from Kiddle encyclopedia articles (including the article images and facts) can be freely used under Attribution-ShareAlike license, unless stated otherwise. Cite this article:
Michigan Territory Facts for Kids. Kiddle Encyclopedia.