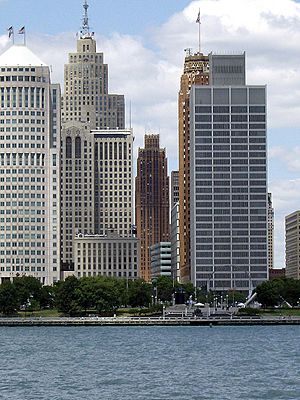 Southeast Michigan, also called southeastern Michigan, is a region in the Lower Peninsula of Michigan that is home to a majority of the state's businesses and industries as well as slightly over half of the state's population, most of whom are concentrated in Metro Detroit.

It is bordered in the north-east by Lake St. Clair, to the south-east Lake Erie, and the Detroit River which connects these two lakes.

Other important cities in within the core counties of Oakland, Macomb, and Wayne:

Some cities are considered within Southeast Michigan, while also being a part of another region or metropolitan area. The following cities tend to identify themselves separately from Southeast Michigan and are isolated from the core counties of Oakland, Macomb, and Wayne.

With 4,488,335 people in 2010, Metro Detroit was the tenth largest metropolitan area in the United States, while Ann Arbor's metropolitan area ranked 141st with 341,847. Metropolitan areas of Southeast Michigan, and parts of the Thumb and Flint/Tri-Cities, are grouped together by the U.S. Census Bureau with Detroit-Warren-Livonia MSA in a wider nine-county region designated the Detroit–Ann Arbor–Flint Combined Statistical Area (CSA) with a population of 5,428,000. 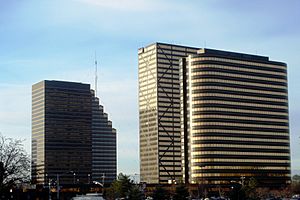 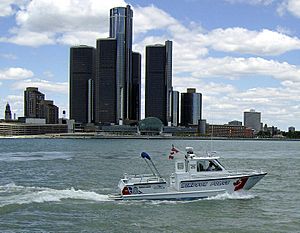 Ann Arbor, home to the University of Michigan's main campus

The main economic activity is manufacturing cars. Major manufacturing cities are Warren, Sterling Heights, Dearborn (Henry Ford's childhood home) and Detroit, also called "Motor City" or "Motown". Other economic activities include banking and other service industries. Most people in Livingston, Macomb, Monroe, Oakland, Washtenaw, and Wayne Counties live in urban areas. In the recent years, urban sprawl has affected the areas of Canton, Commerce, Chesterfield, and Clinton townships. The metropolitan area is also home to some of the highest ranked hospitals and medical centers, Such as the Detroit Medical Center(DMC), Henry Ford Hospital, Beaumont Hospital, and the University of Michigan hospital in Ann Arbor.

The Detroit Metro Airport is the busiest in the area with the opening of the McNamara terminal and the now completed North Terminal. The airport is located in Romulus.

Manufacturing and service industries have replaced agriculture for the most part. In rural areas of Saint Clair County, Monroe, and Livingston Counties still grow crops such as corn, sugar beets, soy beans, other types of beans, and fruits. Romeo and northern Macomb County is well known for its apple and peach orchards.

All content from Kiddle encyclopedia articles (including the article images and facts) can be freely used under Attribution-ShareAlike license, unless stated otherwise. Cite this article:
Southeast Michigan Facts for Kids. Kiddle Encyclopedia.