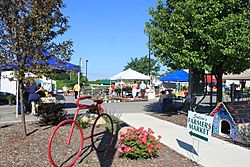 Before the 18th century, Native Americans traveled to what is now Saline to hunt wildlife and gather salt from the salt springs they found nearby. In the 18th century, French explorers canoed up to the area and also harvested the salt. They named the local river Saline, which means "salty" in French. Europeans settled the area in the 19th century, most of them coming from England and Germany. Together with Orange Risdon, a government surveyor who is generally considered to be the city's founder, the residents named the town Saline, which was officially established in 1832. In 1870 railroad service, provided by the Detroit-Hillsdale-&-Indiana Railroad, first reached Saline. In 1875 Salinians built one of the city's most famous landmarks, the Second-Empire frame, 2+1⁄2-story residential building, the Davenport House, a.k.a. Curtis Mansion. The town continued to grow, and in 1931 the Village of Saline became the City of Saline. The Saline Fisheries Research Station was built on the site of a pioneer grist mill. The city of Saline has had its own newspaper since ca. 1874 and is currently served by the Saline Reporter, a weekly print publication, also providing current news on its website.

The weather in Saline is highly variable and is greatly influenced by the Great Lakes. Saline experiences a four-season climate, with summer temperatures reaching as high as 105°F and temperatures falling as low as -29°F in the winter. Average high temperatures in the summer range between 70°F and 85°F, with average high temperatures in the winter ranging from 15°F to 35°F. Precipitation falls year round, with snow being the main form of precipitation during the winter months. Saline experiences an average yearly snowfall of 53 inches (1.3 m), with most of that coming from "Snowstorms" and "Clippers". "Lake effect" is a common sight in Saline during the winter months; however, the snow is typically much lighter than the heavy accumulations that occur on the western side of the state, which is closer to Lake Michigan. The Great Lakes influence the weather in other ways in Saline, bringing constant clouds in the winter, even with dry air masses in place. Summers are cooler than those in surrounding states, with cool breezes off the Great Lakes when the water temperature is colder than the air temperature.

The main weather hazard in Saline—as well as in all of Southeast Michigan—is severe thunderstorms and snowstorms. Tornadoes, high winds, large hail, and lightning are the most frequent causes of death from weather in the area.

The Ann Arbor Railroad also operates as far as Maple Road in the north of the city, but this portion is only used as a siding for the Faurecia Plant and only freight service is offered. 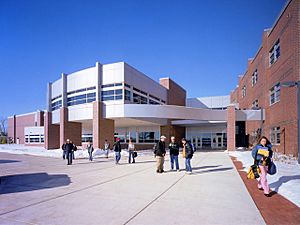 All content from Kiddle encyclopedia articles (including the article images and facts) can be freely used under Attribution-ShareAlike license, unless stated otherwise. Cite this article:
Saline, Michigan Facts for Kids. Kiddle Encyclopedia.