The earliest histories mention trade conducted in the area at the Potawatomi Trail and Pontiac Trail crossings of the Huron River by French traders, and later English then American settlers. The first successful settlement was established at the present site of Ypsilanti about 1809 by French traders.

In 1822, the Legislative Council of the Michigan Territory government defined the name and boundaries of the county; however, it was at first administered as a part of Wayne County. The word: Washtenaw is a variant of the Ojibwe word: "Wash-ten-ong," meaning what is now called the "Grand River". At the time of the official naming of the county in 1822, the headwaters of the Grand River fell within the original boundaries of Washtenaw County, which encompassed a much larger area than the current area of the county. In the Ojibwe language, the word "Wash-ten-ong" literally translates as "far away waters", and was then used by the Ojibwe as the name for the Grand River due to the great length of that river. Accordingly, most literally, the definition of the word "Washtenaw" could be said to mean, "far away waters".

Four years after the first platting out of the county, Washtenaw county was established as a separate self-administered county by an act of the Michigan Territorial Legislature, in 1826. It was attached for administrative purposes to Wayne County until {before 1829} when county government was seated. Ingham and other counties were formed from portions of territorial Washtenaw County.

Swamps were drained and farms were tiled to lower the water table. The swamp northwest of the I-94 and US-23 intersection, and areas within Waterloo Recreation Area still appear as they did to early settlers. As productive farms became established, the local deer herds grew. In the 1820s and 1830s, the events surrounding the independence of Greece from Turkey inspired construction of Greek Revival buildings, and the names of townships, towns, and children.

The "frostbitten constitutional convention" was held at Ann Arbor, the county seat, in 1835. Following resolution of the Toledo War (1835-1836), in which Michigan Territory gave up its claim to the Toledo strip in exchange for most of the Upper Peninsula, Michigan became a state on January 26, 1837. The University of Michigan, founded at Detroit in 1817, was then moved by the state to Ann Arbor in 1839 as a consolation for the city not being named the new state capital, as it had hoped. The University subsequently became and remains the largest employer in the county.

In 1849, the Michigan State Normal School (now Eastern Michigan University) was established in Washtenaw's oldest settlement, the city of Ypsilanti. 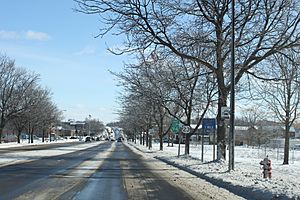 Washtenaw has the highest proportion of Asian-American residents of any Michigan county.

Washtenaw County was formed from a portion of Wayne County. It is one of many Michigan counties which has a name not borne by any other county in the United States. As the population increased, townships were formed. Amongst the townships, communities have grown from hamlets into villages and cities. Some of the townships have elected to incorporate as charter townships. 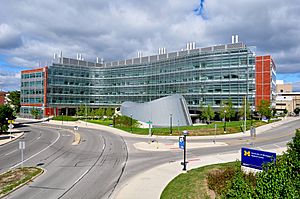 The largest employers in Washtenaw County, as of July 2018, are:

All content from Kiddle encyclopedia articles (including the article images and facts) can be freely used under Attribution-ShareAlike license, unless stated otherwise. Cite this article:
Washtenaw County, Michigan Facts for Kids. Kiddle Encyclopedia.